Philippine police are investigating apparent Islamist threats to kill one of two German hostages. The group has demanded a ransom of over $5 million (over 3.9 million euro) and an end to German anti-IS support. 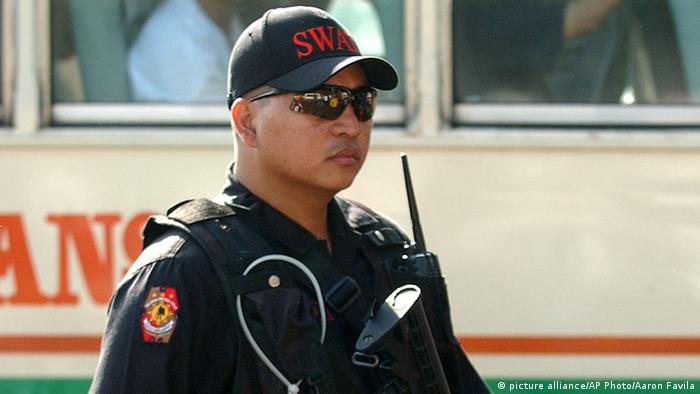 Reports of images showing two German hostages held by Islamist militants in the southern Philippines are being investigated by the Philippines police, the SITE monitoring service said on Wednesday.

The photos showed Stefan Okonek, 71, and Henrike Diesen, 55, who were taken hostage in April, surrounded by hooded armed militants, including one holding a machete.

The images, which have circulated on Twitter, were reportedly accompanied by a threat from Abu Sayyaf rebels to kill one of the two captives, unless a ransom of over $5.6 million (4.36 million euro) was paid and Germany ceases to support US attacks against the "Islamic State" (IS) in Iraq and Syria.

According to the SITE intelligence group, the group warned they "will slaughter one of (the) two hostages" if the demands were not met within 15 days.

"As far as such demands, we are verifying these," said Senior Superintendent Abraham Orbita, police chief of the southern province of Sulu, where the German hostages are believed to be held by Abu Sayyaf rebels.

A German foreign ministry spokesperson said on Wednesday that Berlin would not change its policy following the reports.

"We heard about the report and I would like to say one thing: threats are not an appropriate way to influence our policy in Syria and Iraq," she said.

Okonek and Diesen are thought to have been seized by Abu Sayyaf rebels from their yacht at gunpoint off the western province of Palawan on April 25.

Al Qaeda-linked Abu Sayyaf rose to prominence in the early 2000s by taking foreigners hostage with a focus on kidnap-for-ransom and other criminal activities, including beheadings and bombings. The group is also currently holding Dutch, Swiss, Japanese and Filipino hostages in the south of the predominantly Roman Catholic state.

On Wednesday, the German government also began its arms delivery to Kurds fighting against IS in Iraq. A day earlier, the US and its Arab allies bombed Islamic State targets inside Syria for the first time - also striking a little-known al Qaeda cell on Tuesday called Khorasan, which officials said presented a more urgent threat to the West.

Fresh airstrikes have targeted "Islamic State" territory in strategic Syrian border towns. The strikes come shortly after the US and Arab allies struck IS targets throughout Syria on Tuesday. (24.09.2014)