With his contract expiring soon, Peter Stöger has admitted his hopes of keeping the Borussia Dortmund job hang on his side making the top four. He also faces a dilemma up front ahead of a crunch clash against Leverkusen. 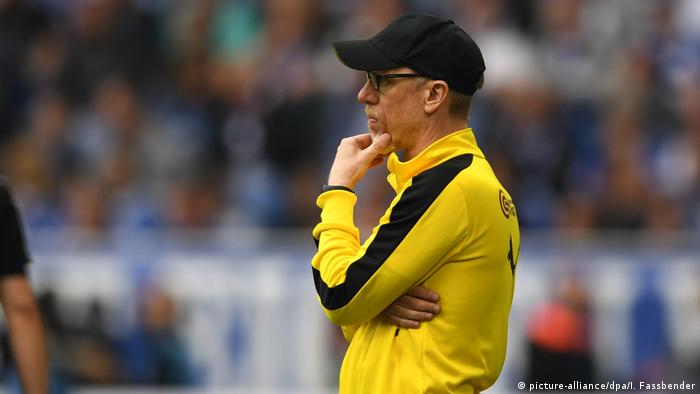 Borussia Dortmund can still salvage something from a particularly trying season by qualifying for next season's Champions League. Achieving that aim could also keep Peter Stöger in a job.

The former Cologne coach was in the right place at the right time when Peter Bosz was given the chop in December, picking up a job his record, especially in the first half of this season, did not qualify him for. But with Hoffenheim boss Julian Nagelsmann - long considered a potential Dortmund boss - set to stay put until 2019, there is a suggestion Stöger could be given another year in the hot seat. But the 52-year-old knows he must deliver to stand a chance, particularly with Lucien Favre also on BVB's radar.

The tame surrender to local rivals Schalke last weekend brought a fresh wave of criticism for Dortmund's Austrian boss but Stöger saw some positives in the 2-0 loss.

"I didn't have the feeling we were just hanging out or not doing everything we could to turn the game around. I saw a game that wasn't optimal for our guys, but the mentality was OK," he said.

That wasn't a feeling shared by many Dortmund fans, whose mood was darkened further by the news that striker Michy Batshuayi will miss the remainder of the Bundesliga season with the ankle injury he picked up in the derby.

"Alexander Isak is an option for up front," Stöger said of the 18-year-old Swede. "Perhaps also one of our fast wingers like Marco Reus. We have enough options to play in this area."

One potential makeshift striker, Andre Schürrle, is doubtful for Saturday's match but defender Sokratis has overcome a stomach bug and is available.

Despite their semifinal defeat to the Bayern Munich juggernaut in the German Cup semifinal in midweek, things are looking brighter, and clearer, for Leverkusen.

The appointment of Heiko Herrlich was largely met with a shrug in preseason but the former Dortmund forward has guided an exciting, attacking and youthful team to third. With Leipzig and Hoffenheim, in fifth and sixth, also playing each other this weekend, three points for Leverkusen will make them heavy favorites to return to the Champions League after a year off.

Stöger is wary of his opponents. "We have to be ready to perform to our maximum - running, tackling and battling. Their team has many variations and they've made great progress.

With Leverkusen's remaining three games coming against sides with little to play for and Dortmund travelling to face Hoffenheim on the last day of the Bundesliga season, Saturday evening is shaping as a make or break for Dortmund and the man that leads them.