The Japanese visitor traveled to Peru with plans to see Machu Picchu. Instead, he spent seven months in lockdown. When the local tourism authority heard about his plight, they decided to organize a special visit. 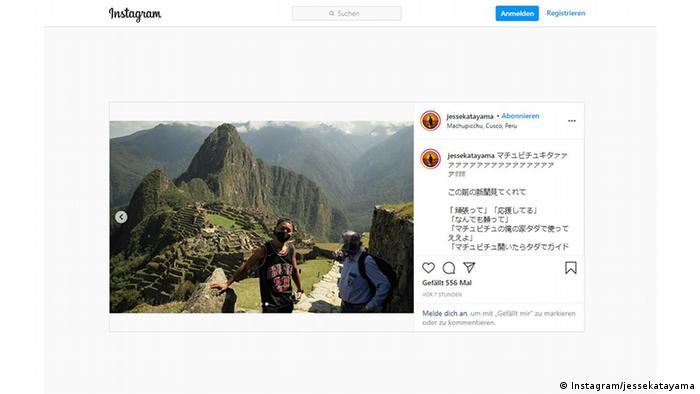 Peru's famous Machu Picchu ruins have opened for the first time after months of lockdown — but just for a single tourist from Japan.

Jesse Katayama had been waiting to visit the World Heritage Site since March when the coronavirus pandemic halted travel, forced widespread closures and left him stranded. Seven months on, the local tourism authority decided to grant him special permission to tour the Inca city.

"The first person on Earth who went to Machu Picchu since the lockdown is meeeeeee," Katayama posted on his Instagram account alongside pictures of himself at the deserted site.

"This is truly amazing! Thank you," he added in a video.

A trip to Cusco and Machu Picchu

A trip to Cusco and Machu Picchu

Not quite the holiday he planned

Katayama, described by local media as a 26-year-old boxing instructor from Nara, had only planned to spend a few days in the South American country so that he could visit Machu Picchu. He bought his entry ticket days before the Peruvian government declared a health emergency, and found himself stuck in Aguas Calientes, a town near the tourist site.

"I thought that I wouldn't be able to go, but thanks to all of you who pleaded with the mayor and the government, I was given this super special opportunity," he said.

Minister of Culture Alejandro Neyra said Katayama had been granted access to tour the site after submitting a special request.

"He had come to Peru with the dream of being able to enter," Neyra said. "The Japanese citizen has entered together with our head of the park so that he can do this before returning to his country."

Machu Picchu, which before the pandemic was drawing thousands of tourists a day, was initially scheduled to reopen to the public in July. But Neyra said that had been pushed back to November. When it does reopen, the site will permit 30% of its normal capacity of 675 people per day.

"We are still in the middle of a pandemic," Neyra said. "It will be done with all the necessary care."

Machu Picchu was built more than 500 years ago by the Inca empire that ruled parts of western South America before the Spanish conquest in the 16th century. The ruins were rediscovered in 1911 by American explorer Hiram Bingham and declared a UNESCO World Heritage Site in 1983.