Thousands of people have taken to the streets across several Peruvian cities as citizens vented their frustrations at the impeachment of Martin Vizcarra. Congress has urged interim president Manuel Merino to step down. 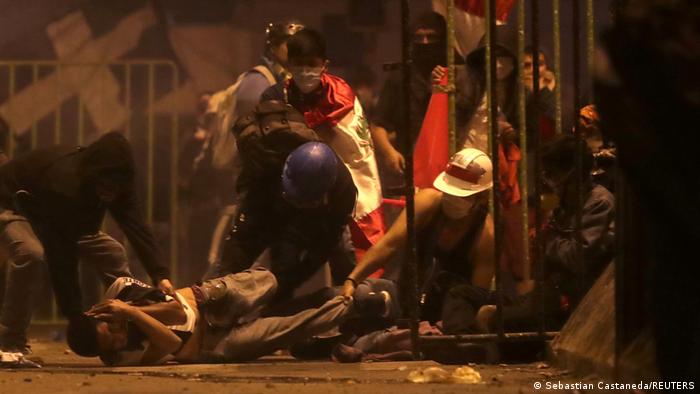 A violent crackdown on protesters angry at the recent removal of President Martin Vizcarra left at least three people dead and 13 injured in Peru on Saturday.

Thousands of people took to the streets in several cities to protest against the impeachment of Vizcarra, who was ousted on Monday over a corruption scandal.

The head of Peru's Congress, Luis Valdez, called Saturday night for the "immediate resignation" of interim President Manuel Merino over the violent crackdown on protests.

As a result of the furor, Congress called an emergency session. Lawmakers will meet on Sunday morning, in person, the Twitter account of the government's legislative branch said.

For the sixth consecutive day, demonstrations were reported in Lima and other cities.

Police again used tear gas and rubber bullets to quell the unrest in the Peruvian capital. The newspaper El Comercio reported some glass pellets were used in the crackdown.

Authorities said two of the three deaths were men aged 24 and 25, who succumbed to gunshot wounds received during the demonstrations.

Amnesty International and local United Nations representatives have in recent days accused the police of using excessive force in their efforts to quell the unrest.

Vizcarra has vehemently denied the allegations and repeated his innocence prior to the impeachment vote. He has accused the opposition of trying to destabilize the country.

'The situation is very tense' – Johan Ramirez reports from Lima

In the Peruvian Andes, villagers travel from far and wide to take part in a special tree-planting ceremony each year. They want to restore once lush forests and protect their villages from landslides.

Peru's Constitutional Court rejected an appeal by President Vizcarra to suspend an impeachment vote. The move comes a week after the parliament voted to start impeachment hearings on grounds of "moral incompetence."

Larry King: Legendary US TV host dead at 87 9m ago