People smugglers profiting from plight of refugees | Europe| News and current affairs from around the continent | DW | 03.09.2015

Europe’s refugee drama is a gold mine for unscrupulous people smugglers. Police and the army are stepping up efforts to clamp down on the illegal business of human trafficking. 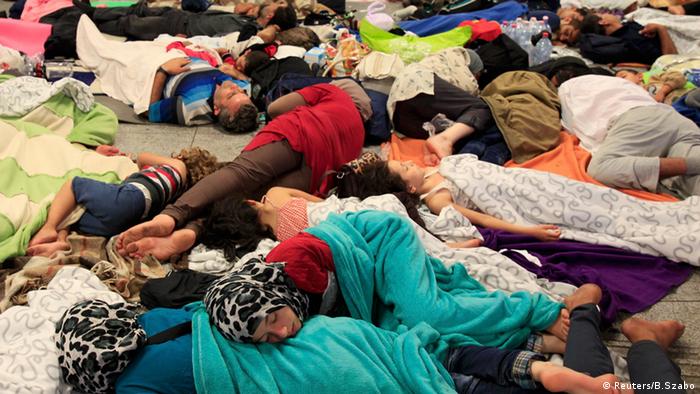 Numbers can never tell the whole story. But they can give a good impression of the dimensions.

Here's one such number: In July alone, 107,500 migrants crossed the EU's outer borders, according to the European border security agency Frontex. Most of these people used the services of people smugglers at some point on their journey.

And that leads us to other numbers: 71 dead refugees in an abandoned truck on an Austrian highway at the end of August; around 500 drowned refugees from two boats that sank off the coast of Libya at the end of August; around 800 dead after a boat filled with refugees sank in April near Lampedusa. According to the UN's agency for refugees, the UNHCR, more than 2,400 migrants have died this year so far while trying to cross the Mediterranean.

What do traffickers earn?

But there's another number we wish we knew: How much money has been earned by human traffickers who pack desperate migrants into boats that aren't seaworthy and then leave them to their fate? Or who pushes them into trucks where they can't get enough air? 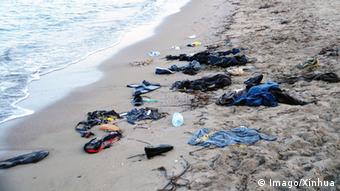 Organizations can only guess. The UN Office on Drugs and Crime (UNODC) estimates that the business of smuggling people into Europe is worth some 150 million euros annually. The actual figure is likely much higher, though, since that estimate is based on 55,000 people being smuggled each year. If you apply the UNODC's estimate to the figures for the month of July, you get a whopping 300 million euros in profits for the traffickers.

A market for opportunists

It's a significant market. And, as Tuesday Reitano from the Global Initiative against Transnational Organized Crime noted, a market that's easy to enter. Reitano told DW that some occasional smugglers have been lured into the trade by the promise of easy money, smuggling one or two migrants across the English Channel for around 1,500 euros.

The fight against human trafficking is a bit like fighting a snake that grows three heads every time one gets cut off. Michael Rauschenbach, Europol's head of Serious and Organized Crime, doesn't deny this, but says there needs to be more cooperation if the smugglers are to be stopped.

"It's important that the information comes together at Europol: Information about the smuggler gangs and organized criminals in the migrants' countries of origin, in the transit countries and in the countries where the migrants end up," he said. This information would help Europol conduct coordinated investigations on the smugglers with EU member states. "We don't want to just interrupt their activities only at a certain point in the EU, or outside the EU; we want to get them in their entirety and shut them down, including the men behind the scenes,” he said.

Arrests a drop in the bucket 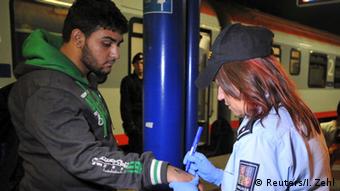 A Czech policewoman writes a registration number on a refugee's hand

Europol has had some successes, such as the dismantling of a Chinese smuggling ring in Spain at the end of June, the arrest of several traffickers in Germany in early June and the Europe-wide arrests of 77 members of another smuggling ring in March.

And yet, these arrests seem like merely a drop in the bucket. Structurally, human trafficking rings are hard to infiltrate. The traffickers work almost exclusively with people of their own nationality, said Reinato. Usually, Nigerians won't smuggle a Syrian, and a Syrian won't smuggle an African. The huge sums of money mostly bypass the traditional banking system. Hundreds of thousands of euros pass hands via the informal Hawala system, leaving no paper trail, Reitano said. So the usual mantra of "follow the money" doesn't apply here.

The market for human trafficking is more lucrative than ever. The civil war in Syria is forcing hundreds of thousands to flee to Europe. Others are fleeing persecution. And still others see the rich northern European states as their way out of economic despair.

Italian criminologist Andrea di Nicola describes smuggling as a market driven by the demand of desperate people. In an interview with DW, he described his meetings with migrants. "They tell me, ‘if I stay at home, I'll die. I only have a chance if I use the services of the smugglers,' " he said. Di Nicola says the migrants know they're risking their lives, but they tell them they'd rather die trying to escape than die at home.

Organized crime expert Reinato points to the huge differences between the different routes to Europe. West African migrants, for example, pay separately for each stage of their journey in advance. "That's why they're also the most endangered. The smugglers already have their money, whether the migrants reach their goal or not." 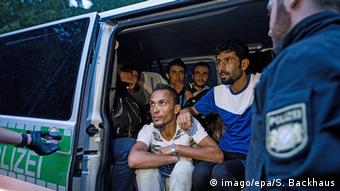 These refugees were stopped by German police near the Austrian border

Refugees from Eritrea or Syria have a very different system to deal with the smugglers. The agreed sum is placed with a neutral party and only released when the migrant has reached his or her transit point, or final destination.

Syrian refugee Alaa Houd told DW about his journey from Turkey to Greece. "First, I had to deposit the money for the crossing at a currency exchange office. The crossing cost 1,150 euros. The money was supposed to stay at the exchange office for a week before either going back to me, or going to the broker. If I didn't set out within the week, I could have gotten my money again. The exchange offices take 50 euros per person for the deposit."

Refugees are constantly exchanging information about how to get to Europe via social media. Hamburg-based migration researcher Vassilis Tsianos goes even further: "Information is the most important asset you need when fleeing to Europe." That's why modern-day refugees rely on having a smartphone that works. With it, they have access to hundreds of Facebook groups posting information about the route. "The Facebook groups even evaluate different smuggling operations. And there are also offers from smugglers on the Internet. Some are secretive, others are less so," said Tsianos.

One Facebook page, for example, bears the title: "For Syrians seeking asylum in Europe." The page has more than 3,000 likes. A short video shows a view from the Turkish coast to a Greek island. The island is only two kilometers away, the text says. Inquiries are not answered on the page, but by private messaging. And a competitor has also posted on the page, saying he offers the same service for half the price. He's even posted a phone number.

"Like all organized criminals, these people respond very quickly to all possible developments that could make things easier or more difficult for them," said Rauschenbach from Europol. But the information revolution in the smuggling trade has also had another effect. There are now Facebook groups that exchange tips about how to cross the border into Europe without using the services of human trafffickers.

Four suspected traffickers have been arrested in connection with the deaths of 12 Syrian migrants, including three-year-old Aylan Kurdi. Turkish PM Erdogan has lashed out at Europe over the refugee crisis. (03.09.2015)