Pentagon: US carried out Christmas Day airstrikes on 'Islamic State'

Washington has said it carried out a string of airstrikes in Syria and Iraq over the holiday. The move comes as the US and its international allies ramp up the fight against the "Islamic State." 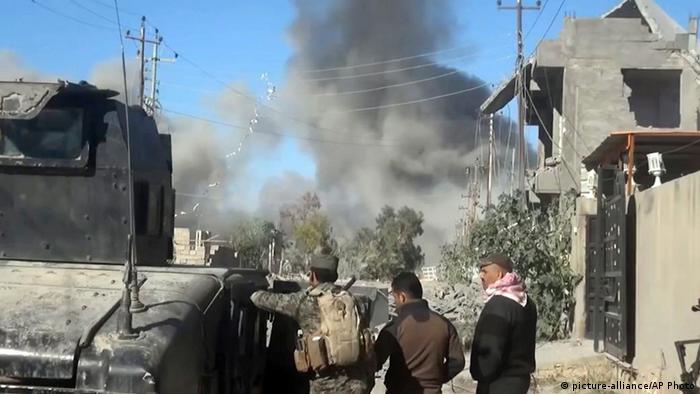 The Pentagon said on Saturday it hit infrastructure, vehicles and personnel belonging to the terrorist group "Islamic State" (IS) in a series of 17 airstrikes carried out on Christmas Day.

Five of the strikes were carried out in Syria and 12 in Iraq, a Pentagon spokesperson said. Besides IS fighters, US and coalition aircraft targeted tunnels, explosive manufacturing sites, bridges and fighting outposts. In Syria, forces struck Ar Raqqah, Manbij and Mar'a. In Iraq, airstrikes targeted five IS-held cities.

The move comes as the US allies managed to advance on key IS strongholds. On Saturday, Iraqi government forces continued to push the militia back in the city of Ramadi, backed by the airstrikes. That same day, Syrian Kurds and Arab rebels retook a dam on the Euphrates River.

The airstrikes were carried out as part of Operation Inherent Resolve, a US military operation created with the intention of destroying IS. It was put into effect at the end of September 2015.

A purported audio message by the "Islamic State" (IS) leader Abu Bakr al-Baghdadi said air strikes by Russia had failed to weaken the group. The authenticity of the voice recording could not be immediately verified. (26.12.2015)