Vienna's first PEGIDA rally was met with more than ten time the number of people in a counter-protest. The marches come at a time of increasing religious tension in the Austrian capital. 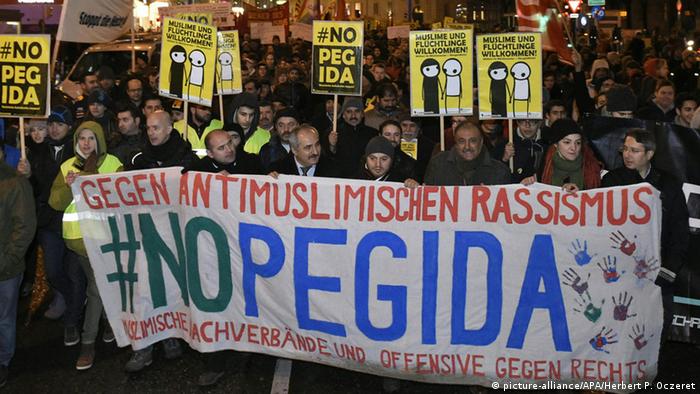 Protestors against anti-Islamist movement PEGIDA demonstrated in several German cities as well as in Vienna on Monday. The Austrian capital also saw its first manifestation of the "Patriotic Europeans Against the Islamization of the West," though a little over 200 demonstrators were met by nearly 5,000 counter-demonstrators, German news outlet DPA reported.

Rallies against facism, racism, and xenophobia were also held in Frankfurt and Kassel on Monday, while similar events were planned for Braunschweig, Magdeburg, and Düsseldorf. Such events have become increasingly common as PEGIDA faces a leadership exodus and an uncertain future, with several of its former organizers having started a breakaway group.

The demonstrations in Vienna come amidst a time of rising religious sensibilities in Austria as well as far-right tension. Before the PEGIDA march, vandals spray-painted swastikas on a Viennese mosque, news agency AFP reported. This followed clashes on Friday night between police and protestors against a traditional ball attend by right-wing hardliners in which 54 people were arrested.

In December, unknown culprits left a pig's head and intestines in front of the door of a different mosque in the capital. Two months earlier, someone wrote slogans such as "Sharia Street" and "ISIS recruitment" over street signs in a Muslim neighborhood.

The Austrian government has proposed requiring a standardized German-language version of the Koran and forbidding foreign funding of Muslim organizations on its soil in a draft law aimed at least in part in discouraging militants. Official estimates say that about 170 people from Austria have joined up with Islamist forces fighting in the Middle East.

Heinz Christian Strache, leader of the far-right opposition Freedom Party, which is neck and neck with the centrist coalition parties in opinion polls, praised PEGIDA, calling it a "serious civil rights movement."