Paul the octopus retires, but a future in Spain beckons | Germany | News and in-depth reporting from Berlin and beyond | DW | 13.07.2010

Paul the octopus retires, but a future in Spain beckons

Paul the octopus was an uncanny judge of Germany's World Cup fortunes. Now, he can relax and retire in his aquarium in Oberhausen, in northern Germany. A village in Spain, however, would like to give him a new home. 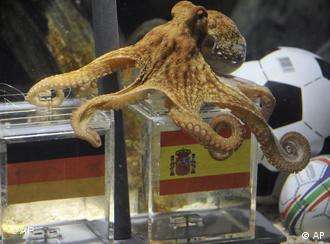 For weeks during the World Cup, long lines formed in front of the Sea Life Aquarium in Oberhausen despite the summer heat, with people waiting patiently to enter the park.

An uninformed observer might think, 'Why don't they just head to the nearest swimming pool in this weather?' The answer: This is where Paul lives. And Paul is an attraction.

Paul is a two-and-a-half-year-old octopus. He has eight arms, nine brains and three hearts. An animal with such 'interior values' might after all really have soothsaying qualities. Two years ago, during the European Football Championship, Paul gave the first samples of his abilities as an oracle.

How does he do it? 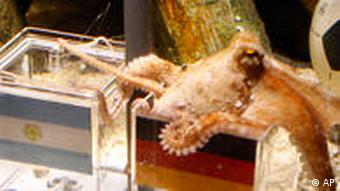 Paul correctly picked the winner of all of Germany's matches

Paul loves mussels. During the 2008 tournament, someone came up with the idea to take two glass containers, drape each with the flag of one of the competing teams, and place a mussel inside.

Enter Paul the octopus, who would hover over the boxes, choose one of the mussels and fish it out - thus predicting which team would win that particular match. Sounds easy, but it isn't.

The aquarium followed the same procedure this year during the World Cup, and Paul was right every time. People wondered how he did it, and turned to scientists. As it turns out, there are plenty of answers, not all of them scientific.

Favorite color or sense of smell?

One explanation: the color combination. Maybe Paul the oracle likes red-yellow. Both the Spanish and the German flag sport these colors. Maybe that's why he made the wrong choice back in the 2008 finals, when he predicted Germany would win. He never made that mistake again.

Are his other correct predictions due to the fact that neither England (red-white) nor Argentina and Uruguay (blue-white) have the right color combination in their flags? But why then did Paul choose the Serbian box (blue-red-white) over the German one in the second group stage match?

A second explanation might help solve that dilemma: the octopus has an excellent sense of smell. Sea Life is adamant that both mussels came from the same source and were of identical quality, and that may very well be true from a human perspective.

But it's possible that the octopus with the sensitive nose went for the better mussel. But even in this case, the prediction's concurrence with the actual outcome of the match leaves too much room for coincidence.

Many a German wished this fate on Paul

Bodyguards for an octopus

Be that as it may, Paul has gained worldwide fame. And like every other star, he doesn't only have fans.

Threats from disappointed German and Dutch soccer fans can be found on the Internet under "Octopus Paul, we know where your tank is." The Internet was swamped by octopus recipes and pictures of octopuses hung out to dry. A video on YouTube showed brutal scenes from Chinese restaurants, where live octopuses were tossed into a boiling liquid.

But none of that really matters to cuddly Paul in his Oberhausen aquarium. Sea Life arranged for 24 hour 'security' for the animal, successfully fending off any cowardly attacks.

Now that the World Cup is over, the hoopla has died down somewhat. Which is a good thing. After all, Paul is two-and-a-half years old, a respectable age for an octopus. He needs his rest.

As a matter of fact, Paul might not be around much longer. While Sea Life wants to make sure he is content until he dies, Paul's fans don't want him to retire. The aquarium receives hundreds of emails every day with oracle questions for the mollusk.

Questions like: "How long will Merkel's coalition last?" or "Am I going to get a D in math this year?" are fun, but Paul, according to scientific expertise, can't answer them. So, in the end, the soothsaying octopus can peacefully swim through his tank toward that eternal resting place under water. 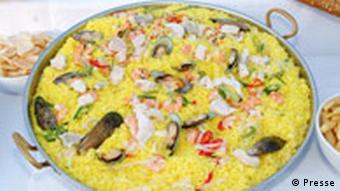 Paella is not to be the famous oracle's fate after all

A generous offer from Spain is not likely to change his fate. A village in the northwestern part of the country has collected money and would like to buy Paul for 30,000 euros ($37,720). They want him to perform, though not as an oracle but as a mascot for a food festival with plenty of octopus specialties on the menu. Evil be to him who evil thinks...

But Sea Life in Oberhausen won't be swayed by the tempting offer. Oberhausen is where Paul will stay, where it's clear this octopus is not going to end up in a paella.

Paul the psychic octopus has provided German fans with a bit of solace, picking Germany to win its third-place match against Uruguay. In the finals, Paul went with Spain, which he picked to beat Germany in the semis. (09.07.2010)

Spain's political leaders are worried about the safety of the oracle octopus who correctly predicted Germany's defeat to Spain in the World Cup semifinals, as Germans demand a public roasting. (08.07.2010)

An octopus famed for his skill at predicting winners of World Cup soccer matches has selected Spain to beat Germany in Wednesday's semifinal. German fans will be hoping this is Paul the octopus' first wrong prediction. (06.07.2010)