Over 150 people have abandoned a ferry that caught fire while on its way from Spain's Palma de Mallorca to Valencia. Three crew members have been injured, officials said. 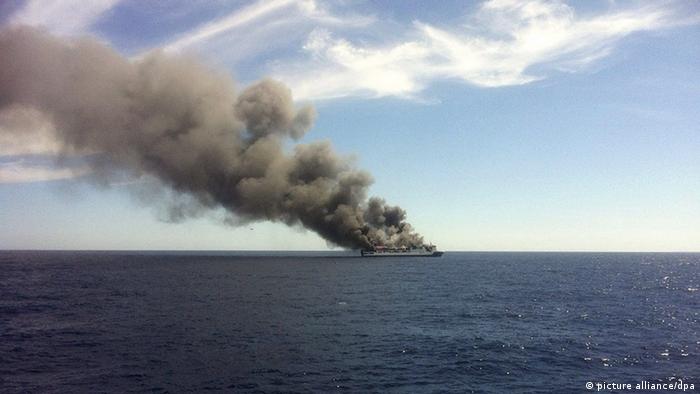 A ferry sailing from the Mediterranean island city of Palma de Mallorca to Valencia on Spain's eastern coast caught fire on Tuesday, forcing 152 passengers to abandon the vessel.

"Everyone has been evacuated," a spokeswoman for ferry company Transmediterranea told AFP news agency. A Spanish coast guard boat along with two ships in the area transported the travelers back to the capital of the Balearic Islands, Mallorca, the port authority said in a statement.

Three crew members who got injured were flown by a helicopter to a hospital.

The ship caught fire about 27 kilometers (17 miles) from Palma de Mallorca, according to a statement by the Spanish development ministry. Photos of the incident showed huge plumes of smoke rising from the boat.

The cause of the blaze was not immediately clear. Media reports said the fire started in the engine room.

In South Korea, an appeals court has found the captain of the Sewol ferry that sank a year ago guilty of murder. The ferry disaster claimed the lives of 304 people on board, most of whom were teenagers. (28.04.2015)

Bangladesh river ferry capsizes with around 200 people on board

A ferry carrying around 200 passengers has capsized in central Bangladesh. A rescue operation was ongoing and it wasn't immediately clear whether there were any fatalities. (04.08.2014)