Lawmakers worldwide, especially women, are facing an "upward trend" of violence and intimidation, warns the International Parliamentary Union. Most of the 552 cases it examined involved abuse of opposition MPs. 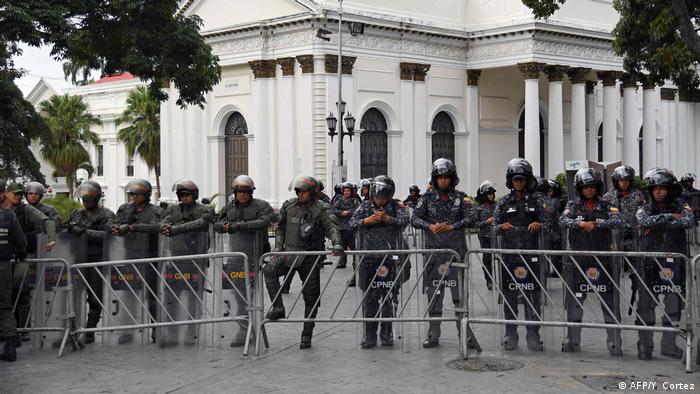 Police stand guard outside parliament in Venezuela — the country with the highest level of abuse against MPs, according to the IPU

Threats and attacks against lawmakers are on the rise, with some governments using the coronavirus pandemic as an excuse to target opposition politicians, according to the International Parliamentary Union (IPU).

The Geneva-based body said there had been an "upward trend" worldwide since it started monitoring abuse faced by parliamentarians in 1977. And, scrutiny of cases this year by the IPU's human rights committee had also revealed an "uptick" in MPs being exposed to acts of intimidation and violence.

Common violations against parliamentarians, cited by the IPU, included "undue" suspensions from parliament and losses of mandates, lack of fair trial, threats, intimidation and clamps on freedom of expression.

Of the 552 registered cases examined by its human rights committee, 85% involved opposition lawmakers.

Threats and acts of intimidation had moved from fourth up to the third most common category, with women parliamentarians more exposed to torture, ill treatment and violent acts.

Geographically, the Americas, particularly Venezuela, accounted for the greatest proportion of violations against parliamentarians, followed by the Middle East — 178 cases followed by 137 cases respectively.

Europe accounted for 60 cases, behind Africa with 93 and Asia with 84.

Read more: Where the world's parliaments meet eye to eye

In Venezuela it was monitoring the cases of 134 parliamentarians opposed to President Nicolas Maduro who had allegedly been "attacked, threatened, harassed or otherwise intimidated."

The IPU also warned that governments in countries like Ivory Coast, Venezuela, Uganda and Zimbabwe were using the coronavirus pandemic and lockdown laws "to detain or otherwise infringe upon the rights of opposition parliamentarians," the organization said.

However, lobbying by the IPU and what it termed the "global parliamentary community" had led to "positive news," the Geneva-based body said, citing the recent release from detention of four members of parliament in Ivory Coast.

The 179-nation IPU, created in 1889 by Frenchman Frederic Passy and Englishman William Randal Cremer, specializes in compiling information on parliaments, including women's participation.

Its resources are available via its database Parline and multilingual publications primarily meant for parliamentarians and policy makers. Citizens can also research entitlements to vote and stand as candidates, and examine each parliament's working methods, with much of the information supplied by the parliaments themselves.

Somalian women, for example, were backed by the IPU when they campaigned earlier this year for a bill to reserve 30% of seats for women in the country's 2021 general election. Currently, women hold 24% of seats in Somalia's two-chamber parliament.

The IPU's secretary general is Martin Chungong, who served in the Cameroonian parliament for 14 years before joining the IPU in 1993.