Park Geun-hye, disgraced former South Korean President, locked up in Seoul | Asia| An in-depth look at news from across the continent | DW | 30.03.2017

After nine hours of questioning, a Seoul court has jailed Park Geun-hye over fears she could destroy corruption evidence. Park faces 20 days of imprisonment while police investigate corruption allegations. 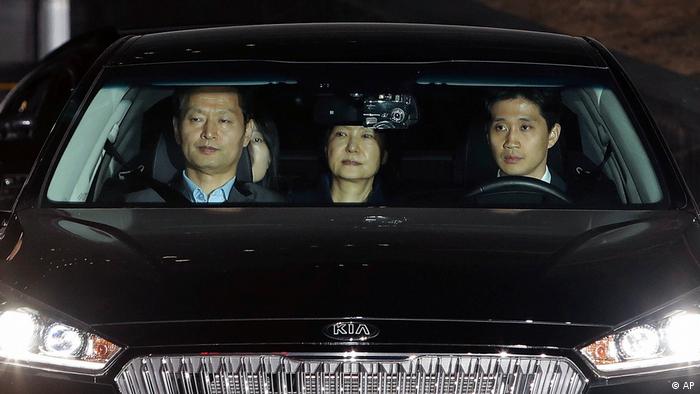 Ousted South Korean President Park Geun-hye was locked up in a detention center early Friday morning after a Seoul court approved her arrest.

The Seoul Central District Court approved prosecutors' request to arrest her, fearing that she may try to destroy evidence of corruption. The court questioned her for nearly nine hours on Thursday before it granted the arrest warrant.

Prosecutors could detain Park for up to 20 days before formally charging her. Possible charges included "bribery, coercion, abuse of power and disclosure of state secrets," the Yonhap news agency reported.

Prosecutors had submitted about 120,000 pages of documents relating to the case and said it would be "counter to the principle of fairness" if she was not arrested.

"The accused is denying most of the charges, and there is a risk of destroying evidence in the future," they said.

Hang your head in shame

"The least she can do as the ex-president who damaged national dignity is to admit her criminal acts, bow her head and seek forgiveness," said a spokesman for the main opposition Democratic Party.

Park, South Korea's first female president, was impeached by the National Assembly in December amid accusations of colluding with her close friend Choi Soon Sil to extort money from top South Korean companies and of allowing her confidante to interfere with state affairs.

The Constitutional Court ruled to dismiss Park over the allegations earlier in March, removing her immunity from criminal prosecution.

Park argued she should not be arrested or held while prosecutors investigate the scandal, saying she did not pose a flight risk and would not try to tamper with evidence.

She and Choi, who was being held at the same facility, both denied any wrongdoing.

Her impeachment left a political vacuum ahead of a May 9 election, at a time of rising tensions with North Korea over its weapons program and with China, which is angry over South Korea's decision to host a US anti-missile system.