More than 100 people have died in at least six terror attacks in Paris, and France has declared a state of emergency. Andy Valvur was at a theater near one of the attacks, and reports from a city on edge. 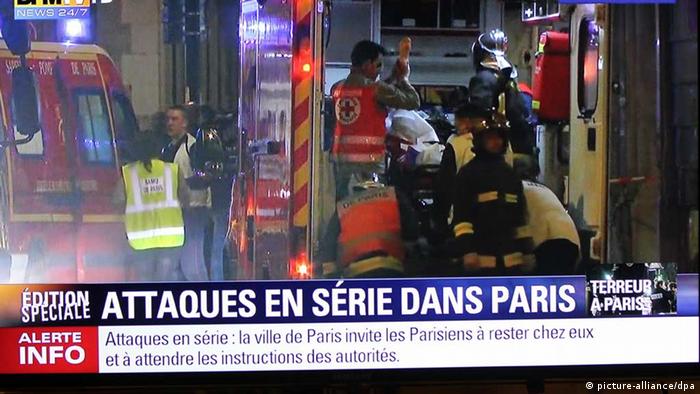 The City of Light has experienced its deadliest violence since World War II.

The city is on edge. At the show the emcee Sebastian Marx, an American expat comedian living in Paris, took to the stage to announce the tragic events.

Audience members were invited to stay in the safety of the comedy club on the fourth floor until further notice.

Everyone was glued to their cell phones, reassuring friends and relatives that they were safe. My own phone lit up almost immediately with friends and family wanting to hear from me. 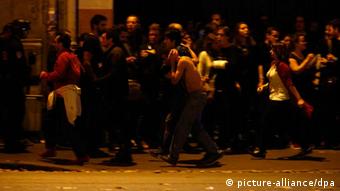 Little by little people started leaving the venue, but as news trickled in about further shootings near the Chatelet/Les Halles metro stops in the city center, people huddled with each other, searching the Internet for more news.

Many people used the ride-sharing service Uber to get home. The service, normally easy to reach by phone, was jammed and people were forced to wait for a car.

Once out of the theater, we stood on the sidewalk waiting for our ride to arrive. But there was a different feeling to the city. Police cars sped by, blue lights flashing. Taxis, red lights on the roof, were full.

Everyone walking down the sidewalk was seen as a possible assailant. It was an eerie feeling.

I watched one man walk down the street holding something that turned out to be a smartphone, but dressed in dark, military style clothing, he could have been one of the bad guys. For a few moments, I seriously looked for cover.

It's a sad night in Paris. Sitting now in the hotel room with the television tuned to a news channel, each news bulletin is worse than the last.

For now, according to the authorities, the operation is over, but tomorrow, Paris will begin mourning.