Paris to Compensate Victims of French Nuclear Testing | Europe| News and current affairs from around the continent | DW | 24.03.2009

France has earmarked 10 million euros for people suffering health problems resulting from its nuclear tests, the Defense Ministry said. Some 150,000 people are estimated to have been affected. 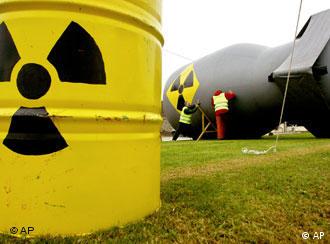 The French government says it will pay out at least 10 million euros ($13.6 million), initially for one year, to people with health problems as a result of French nuclear tests carried out in the Algerian Sahara and in Polynesia, Defense Minister Herve Morin was quoted as saying on Tuesday, March 24.

"About 150,000 civilian and military employees are theoretically concerned, as well as the people who lived in the Sahara and Polynesia at the time of the tests," Morin said in an interview published in the daily Le Figaro.

Between 1960 and 1996, France carried out a total of 210 nuclear tests in the Algerian Sahara, French Polynesia and the Pacific Ocean. 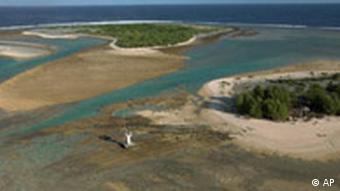 French Polynesia was home to most of France's nuclear tests

Participants in the tests and people living in areas close to the testing zones have long complained of health problems including leukemia and other forms of cancer.

France has for a long time refused to officially recognize a link between its testing of nuclear bombs and health complaints reported by both military and civilian staff involved in the tests.

"(French) governments believed for a long time that opening the door to compensation would pose a threat to the very significant efforts made by France to have credible nuclear deterrent," Morin told the newspaper. "But it was time for France to be true to its conscience."

The individual cases will be examined by an independent commission comprised of physicians and headed by a magistrate, Morin said.

Contrary to a past decision, those demanding compensation will no longer have to prove a causal link between the radiation and their illness.

"The state will have to prove that the sickness was not radioactively induced," Morin said.

The measure is to be presented to the Cabinet soon, he added.

Iran alarmed the international community this week by using newly-developed missile technology to launch a satellite into space. Envoys from six countries are meeting in Germany on Wednesday to plan a response. (04.02.2009)

The United Nations nuclear watchdog has accused Iran of conducting secret studies to develop nuclear weapons capabilities. The UN agency sharpened its critical tone ahead of a key meeting next week. (28.05.2008)