Delegates at the UN Paris climate summit have approved the final deal to reduce greenhouse gas emissions. World leaders have hailed the pact as 'historic.' 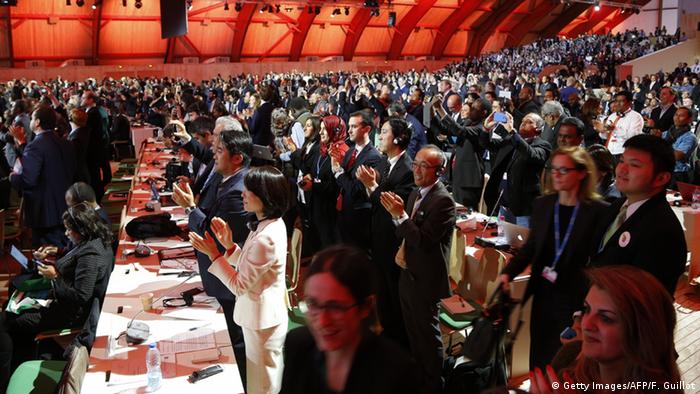 One hundred and ninety-five nations agreed on Saturday, at the UN climate change conference in Paris, to a final accord aimed at transforming the world's fossil-fuel-driven economy to help slow the place of global warming.

Signaling the deal had been agreed by all states present, French Foreign Minister Laurent Fabius banged down his gavel to raptuous applause.

"I see the room, I see the reaction is positive, I hear no objection. The Paris climate accord is adopted," he announced.

The unpredecented deal to slow the effects of man-made climate change will begin by cutting and then eliminating greenhouse gas pollution, officials said.

Countries have agreed to commit to keep average global temperatures from rising another one degree Celcius (1.8 Fahrenheit) between now and 2100.

The also vowed to pursue efforts to meet the more ambitious target of keeping the temperature rise below 0.5 degrees from today, which several small island states had demanded.

The pact means that countries have pledged to limit the amount of greenhouse gases emitted by human activity to the same levels that trees, soil and oceans can absorb naturally, beginning before 2100.

The deal also includes $100 billion (92 billion euros) a year in finance until 2020, to help developing countries meet their targets, although it was not included in the legally binding section of the deal, due to US pressure. The accord also pledged to grow this amount after 2020.

But critics said the 31-page document doesn't contain any mechanism to punish countries that don't or can't contribute to the goal. 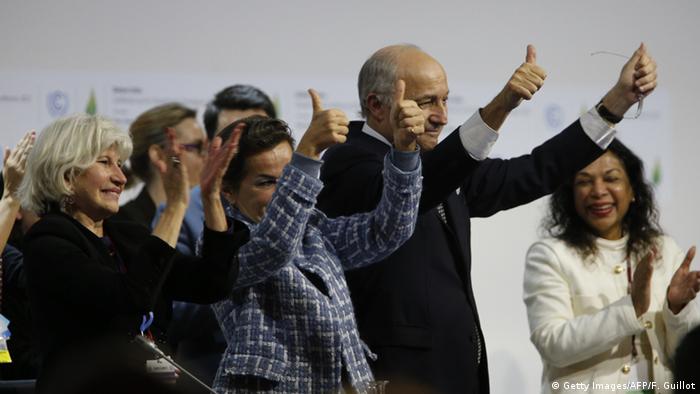 Saturday's meeting opened two hours later than scheduled due to objections from the US which requested that a one word change from "shall" to "should" in a passage of the text.

Within minutes of its adoption, US Secretary of State John Kerry declared that the pact would "prevent the worst, most devastating consequences of climate change from ever happening."

British Prime Minister David Cameron hailed the accord as important for future generations.

French President Francois Hollande paid tribute to those taking part in the final negotiations, tweeting that it is rare to be able to change the world, "but you have!"

German environment minister Barbra Hendricks said: "I am very happy that we have achieved this first universal climate agreement in spite of all difficulties. We have reached an ambitious accord. We have written history together."

Former US vice president and environmental campaigner Al Gore said: "Years from now, our grandchildren will reflect on humanity's moral courage to solve the climate crisis. And they will look to December 12, 2015 as the day when the community of nations final made the decision to act."

The deal now needs to be ratified by at least 55 countries representing 55 percent of global emissions, before taking effect.

US President Barack Obama was due to make a statement at 22:30 UTC on Saturday.

Meanwhile, thousands of protesters gathered under the Eiffel Tower on Saturday evening as the accord was finalized to denounce the deal as too weak to save the planet.