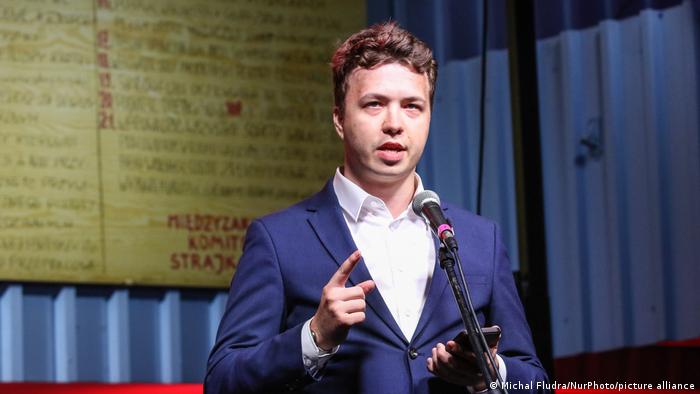 The parents of imprisoned Belarusian journalist Raman Pratasevich have called on German Chancellor Angela Merkel for help in granting their son's release, according to a report published by the German Bild newspaper on Friday.

Dimitri and Natalia Pratasevich have expressed deep concern over their son's well-being while in prison, and believe he is being tortured by the government.

What did the parents ask of Merkel?

"We urge you to help us, so that all the innocent people can be released from prison," the couple told the mass-circulation newspaper in a message directed at Merkel. "They urgently need help, because they are exposed to violence and sadism on a daily basis."

Pratasevich and his Russian girlfriend, Sofia Sapega, were detained by Belarusian authorities on May 23 after their Ryanair passenger plane was forced to land in Minsk, the capital of Belarus. The Ryanair flight was traveling from Athens and was set to land in Lithuania. However, Belarus strongman Alexander Lukashenko scrambled a fighter jet to force the airliner to land in Minsk.

The blogger's parents called on Merkel to stop Lukashenko and said innocent lives, including those of children, are being taken by his government.

Why are Pratasevich's parents concerned?

Pratasevich's parents say they have been unable to reach their son while in prison.

"The letters we sent Raman since his arrest have not been delivered to him. Even his attorney can't speak to us freely by phone," Dmitri said. "Instead, state authorities have already released two videos in which forced concessions are made. You can see clear signs of torture in them: his nose is crooked. It is probably broken. There are bruises on his neck. An expert told us these are marks due to strangulation."

Belarus opposition leader Sviatlana Tsikhanouskaya also believes Pratasevich was forced to make confessions due to the threat of violence from Belarusian authorities.

Pratasevich's parents are also on the run from Lukashenko, with the couple having fled Belarus for Poland.

"It was clear to us that we would be arrested due to our son's work.. So we packed up our things and left the country," Dimitri said. "We had to leave our beloved homeland, although we have never been politically active. I even served in the military until 2019."

The 26-year-old Pratasevich also lived in Poland prior to the arrest, continuing his work against the Lukashenko regime. The blogger previously served as the editor-in-chief of the Telegram channel Nexta, which coordinates demonstrations against Lukashenko..

Merkel: 'All the explanations are implausible'

How has Germany reacted to Pratasevich's arrest?

Merkel has called on Pratasevich and Sapega to be released. She has also called explanations provided by the Belarusian authorities — who say the plane needed to be grounded due to a bomb threat from Palestinian Hamas — regarding the hijacking "completely implausible."

The EU has applied new sanctions on Belarus since Pratasevich's arrest, banning Belarusian carriers from flying over EU airspace or using EU airports. Multiple European airlines, such as German carrier Lufthansa, have also decided to stop flying over Belarusian airspace.

Lukashenko has accused the West of waging a hybird war against him since the arrest, and claimed Pratasevich was planning a "bloody rebellion."

The arrest comes as Belarus faces a political crisis since last year's presidential election between Lukashenko and Tsikhanouskaya.

Lukashenko has governed Belarus since 1994. Last year, the country's officials declared him the winner of the presidential election against Tsikhanouskaya. Opponents believe the election was rigged in Lukashenko's favor. Protesters have poured into the streets of major Belarusian cities over widespread reports of vote stealing, with the regime responding by  clamping down on protesters and critical media.