A century after the UK endorsed a Jewish "home" in Palestine, protesters in Ramallah and other cities asked for an apology from London. Israeli PM Netanyahu rebuked the criticism at a commemorative dinner in the UK.

Around 3,000 people marched through the streets of Ramallah to the British Consulate on Thursday to protest the Balfour Declaration, with similar protests reported in Nablus, Gaza and Jerusalem.

The demonstrations marked the centenary of a 1917 document that would lead to the creation of the state of Israel.

What is the Balfour Declaration?

What did the protesters say?

Palestinians denounce the document as the first move toward the creation of Israel in 1948 and the long and bloody conflict between Palestinians and Israelis in the Holy Land. 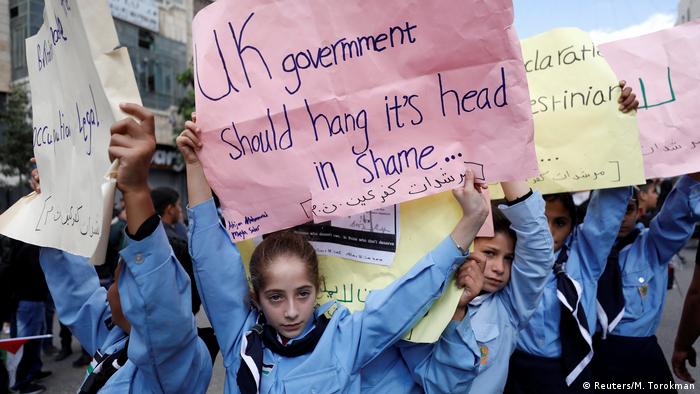 Israel sees Britain as providing the supporting role in a heroic and pioneering mission by early settlers to return Jews to their ancestral home. The Israeli parliament is set to hold a special commemorative session next week.

Israeli Prime Minister Benjamin Netanyahu was in London for a working lunch with UK counterpart Theresa May, before a special "Balfour centenary dinner." He was also set to meet UK foreign minister Boris Johnson.

Ahead of the trip, Netanyahu described the event as "a very important centenary."

"I very much appreciate this gesture by the prime minister of Britain and the government of Great Britain," he told reporters.

"The Palestinians say that the Balfour Declaration was a tragedy," Netanyahu said. "It wasn't a tragedy. What's been tragic is their refusal to accept this 100 years later."

Thousands of Palestinians took to the streets to demand an apology from the United Kingdom for endorsing the creation of a Jewish state in Palestine. The 1917 document helped lay the legal foundation for today's Israel. (02.11.2017)