Palestinian Territories: Having their say

Encouraging young Palestinians to ask critical questions and voice opinions has rarely been a priority in the classroom. But new school media groups are now showing youths ways to express their views. 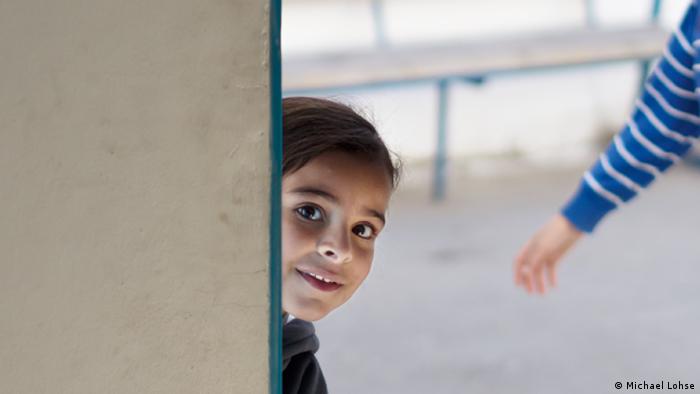 With a microphone in his hand, Ahmad Al-Khatib calls out instructions in a loud voice to the other ninth-graders in his class who are there for early morning exercises. "Right, left, forward, and back!" In the schoolyard in front of him, about 250 boys have lined up in rows under a cloudless sky. The sun promises a warm autumn day here in Hizma, a village just eight miles east of Jerusalem. It's a quarter to eight and this early workout is part of morning radio - a ten-minute live show held at every Palestinian school just before classes start. The education ministry prescribes part of the program's content, and students are allowed to organize the rest themselves. After the morning's exercises are complete, Ahmad confidently guides his listeners through the rest of the program - a short Koran sura, followed by the national anthem, and then a patriotic piece written by a member of the school media group. 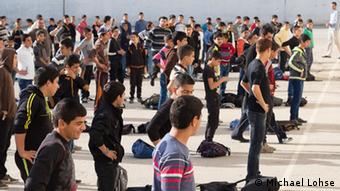 Morning's exercises in a schoolyard in Hizma

There's always been morning radio, recalls 14 year old Ahmad. But in the past school children rarely wrote the content themselves. The school media group is new as well. "Together we come up with the topics and then write them up," Ahmad says. Two teachers supervise the group, and Ahmad and his classmates are learning how to research and write journalistic reports. For Ahmad, the most pressing topic right now is the schoolyard. "We really need to get rid of the asphalt and replace it with grass," he says, explaining that students sometimes trip while playing soccer and hurt themselves on the rough surface. He proudly adds that he and his friends wrote a piece on the issue for the morning radio show.

The new school media groups and editorial changes to the morning radio program are the initial results of a long-term project called "Speak up! Media Literacy for Palestinian Youth." Together with Palestinian youth organization Pyalara, DW Akademie is helping students to better understand and classify media, as well as create it themselves.

"Young people here have few opportunities to speak out in public and represent their views in the social dialogue," says Verena Wendisch, DW Akademie country coordinator for the Palestinian Territories. She adds that the party propaganda in the media in the region also makes it hard for young people to develop their own critical views. "DW Akademie has long supported basic and advanced journalism training in the Palestinian Territories, but that's only one side of the coin," she stresses. "The new project focuses on the other side as well - on young media consumers." The aim is to strengthen the social participation of young Palestinians. 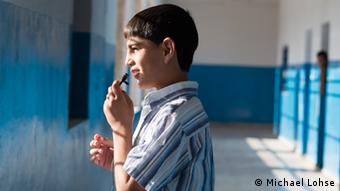 This is why DW Akademie and Pyalara are working closely with the Palestinian state and UNRWA schools (United Nations Relief and Works Agency for Palestine Refugees in the Near East), which are those schools run by the United Nations agency for Palestinian refugees. In workshops like the ones in Ahmad's school, DW Akademie and Pyalara train students and teachers alike. Teachers learn the basics of journalism, so they can work with the media groups and encourage students to express their views through media. The teachers also receive instruction and learning materials on media literacy that will be used in Palestinian schools in the future. "We're trying to get everyone involved," says Tilman Rascher, head of DW Akademie's Middle East and North Africa division. "But this is also new ground for us and means that our trainers and project managers are juggling several things at once. It’s an exciting challenge."

Access to media can change young people's lives. That's something Alaa Ahmad learned in a 2014 summer camp organized by Pyalara and DW Akademie. Alaa comes from Qalandia, 15 kilometers north of Hizma. It's a village that’s been strongly affected by the region's past and present. Qalandia is both the name of an Israeli checkpoint and the name of a refugee camp here. People who live in the camp are descendants of Palestinians who were forced from their homes when the State of Israel was founded in 1948. Alaa attends a UNRWA school for girls in Qalandia. 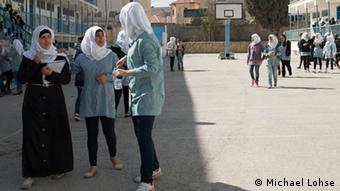 14 year old Alaa proudly shows off the first wall newspaper that she and a group of students produced this school year. Alaa and the others on the new newspaper editorial team - ten girls between the ages of twelve and fourteen - meet in the school library during school breaks and free periods. Today she sets a large piece of orange cardboard down on one of the many tables. Glued onto it are several articles and photos that were produced by the young, budding journalists. The focus here is on bullying at school.

Alaa explains that older students sometimes steal pocket money from the younger ones or make them carry their school bags. "We think it's important to show the older girls how their bullying affects the victims. If they can put themselves in the place of the children they are mistreating, they might realize the harm they're doing." Alaa has lots of ideas for other issues that she'd like to see broadcast on morning radio or published in the wall newspaper: "We desperately need green spaces in Qalandia," she explains. "I sometimes sit on the roof of our house and think about changes I'd like to make - where I could plant a garden, for example," she says. Being involved with the wall newspaper has given Alaa and her school friends a way to express their everyday concerns. 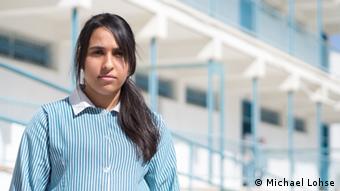 Alaa's and Ahmad's schools are two of the eight schools taking part in this media literacy project. The schools are all located in what's called Area C - a socially and economically disadvantaged territory under almost complete Israeli civil administration and security control. Financed by Germany's Federal Ministry for Economic Cooperation and Development (BMZ), the project began in spring 2014 and is scheduled to end in 2016. "For far too long our children have been raised to say yes to everything. They haven't been encouraged to ask questions," says Hania Bitar, head of the Pyalara youth organization. "This project is helping a new generation of children learn to think critically, do their own research and challenge things," she notes.

This new perspective has had a real impact on Ahmad's life. He enjoys the newly founded media group and says it’s boosted his confidence. "I'm optimistic they'll fix the surface in the schoolyard by the end of the school year," he says with conviction. And Alaa, says she can't imagine her life anymore without the media. "I've become much more confident since I started working on the wall newspaper and morning radio," she says. "When everyone at school reads and listens to what I write - it really gives me courage."

As DW Akademie brings out a new media literacy discussion paper, #mediadev takes a look at how a project in the Palestinian Territories is giving young people tools to understand a changing media world. (20.10.2015)

Media and information literacy is a hot topic in media development today. And for those who don't know exactly what the term means and why it's so vitally important, we've put together this overview for you. (27.04.2015)