Pakistan's crisis could end in a military coup

Experts are not ruling out the possibility of a military takeover in Pakistan after the country's top court ordered the arrest of the PM. Anti-government protesters continue with their sit-in outside parliament. 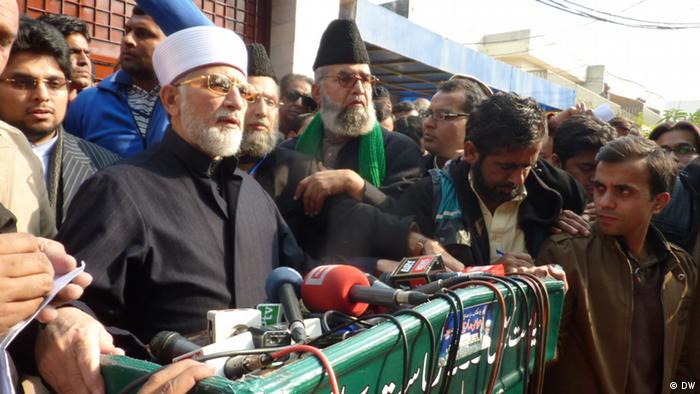 An anti-government protest in Islamabad enters its third day as tens of thousands of people demand the resignation of the Pakistan People's Party's (PPP) government and that an "impartial," interim government backed by Pakistan's powerful army and newly-independent judiciary be formed.

The so-called "long march" is led by a moderate Pakistani-Canadian cleric Tahir-ul-Qadri, who is demanding major reforms in the electoral system of the country ahead to this year's parliamentary elections. The cleric has threatened to storm the parliament if his demands are not met.

The political turmoil in the Islamic Republic worsened with the Supreme Court's order on Monday for the arrest of Prime Minister Raja Pervez Ashraf on corruption charges. Ashraf and his party assert their innocence. 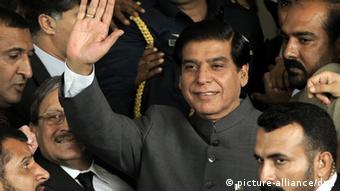 Ashraf is leading an 'unpopular government'

Pakistan's non-governmental Human Rights Commission of Pakistan (HRCP) said in a statement following the Supreme Court order that the arrest order of the prime minister threatened the democratic set up of the country.

"… any derailment of the democratic system at this juncture will imperil Pakistan's integrity and undermine the prospects of the future generations," HRCP chairperson Zohra Yousuf said in statement on Tuesday.

Many analysts in Pakistan believe it is no coincidence that the apex court ordered the prime minister's arrest at a time when the agitation against his government is at its peak.

"Tools of the establishment have now been exposed,” Asma Jahangir, prominent human rights activist and former president of the Supreme Court Bar Association, told the media at a press conference in Karachi on Tuesday. She said Tahir-ul-Qadri's "long march" and the court's order appeared "pre-planned."

Supporters of President Asif Ali Zardari's PPP government are of the view that the judiciary, backed by the army and its Inter-Services Intelligence (ISI) spy agency, are trying to undermine the supremacy of parliament and civilian democracy.

But experts say that the new crisis seems to be more detrimental than the previous ones, as the country is heading towards general elections. They say that Qadri's sudden arrival from Canada to Pakistan and the success of his well-financed campaign looked all well-timed. 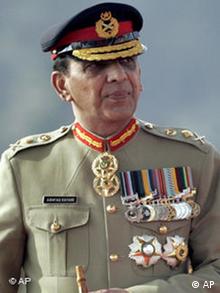 Army chief Ashfaq Pervez Kayani is the most powerful person in Pakistan, analysts

"Most people in Pakistan think Qadri is being backed by the Pakistani establishment, particularly the Pakistani army," Ghazi Salahuddin, a senior journalist in Karachi, told DW, adding that the possibility of the military coup in this situation could not be dismissed.

Pakistani has seen three military coups throughout its 65-year history. Analysts say Pakistani generals call the shots even when the civilian government is in power.

Salahuddin was of the opinion that the government had become extremely unpopular and a lot of people did not want to see them in power anymore. He, however, criticized the way in which Qadri was trying to dislodge the government.

"The PPP's governance has been dismal over the last five years. The Quetta killings and the way the government dealt with it made people angrier with the government. It is true that this government has been shaken," Salahuddin commented.

Independent researcher and political activist Sartaj Khan believes the liberal intelligentsia is opposing Qadri because he challenges the status-quo.

"The liberals want to save the corrupt PPP government and are ready to tolerate it for another five years in the name of 'fake democracy.' What is important about the anti-government protests is not who Qadri is but what he stands for. People are fed up with this system," Khan told DW. He said that PPP supporters were trying to scare people with the idea of military rule in the country to prolong their rule.

But Islamabad-based human rights activist Tahira Abdullah said that the democratic process would take time, and would only be possible through elections. "We know that the rulers are corrupt but people can vote them out in elections. Only regular elections can guarantee good governance," she said. 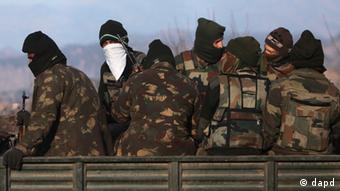 Experts say the US, Pakistan's biggest aid donor, is closely observing the deepening crisis in the nuclear-armed state.

Recent border clashes between South Asian arch rivals Pakistan and India have also alarmed the US and other Western countries whose armed forces are preparing to leave Afghanistan in 2014. Tensions between India and Pakistan can have a negative impact on the stability of Afghanistan and its peace process. Experts point out that political chaos in a volatile country like Pakistan and its tensions with India are disturbing not only to the region but to the entire international community.

"Pakistan's history is marred by these kinds of political crises. The international community does not trust us. The regional situation is very complex. The recent political developments in Pakistan cannot be looked at in isolation," Zaman Khan, a Lahore-based activist, told DW.

Nuclear-armed Pakistan is struggling with a weak economy and bloody Islamist insurgency led by the Taliban.

Pakistan has been thrown into political turmoil after the Supreme Court called for the prime minister to be arrested. The move comes as thousands protest in support of a cleric calling for a new government. (15.01.2013)

Thousands of protesters have gathered in Pakistan's capital city, Islamabad, in a show of support for a controversial cleric. Authorities there have reportedly fired tear gas to disperse the crowds. (15.01.2013)

Tensions flare between India and Pakistan

Amid the warmongering on both sides and a flurry of diplomatic protests and countermoves, experts say that reckless killings have been a recurring feature between the two armies along the so-called Line of Control. (15.01.2013)

The partial grid failure affected about 80% of the total population. Dhaka has struggled to provide Bangladesh with energy as prices soar for gas — the country's main source of power.