Pakistanis suffer under high inflation amid IMF negotiations | Asia | An in-depth look at news from across the continent | DW | 22.10.2021

Pakistan is trying to revive a $6 billion loan package with the IMF. The country needs the money, but economists are worried the IMF's conditions will trigger price hikes burdening Pakistani consumers. 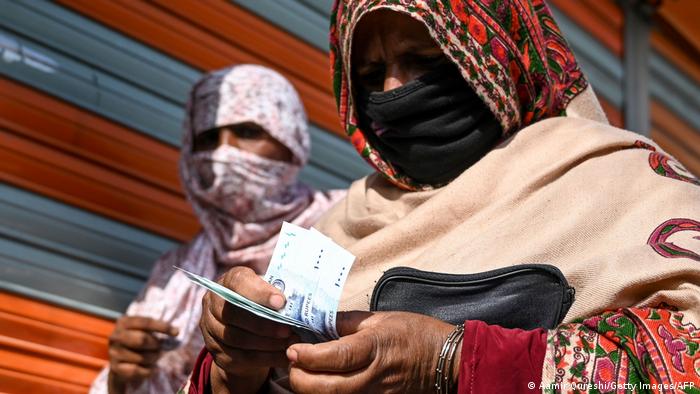 Pakistani finance officials were in Washington this week trying to close a deal with the International Monetary Fund (IMF) to release a suspended $1 billion tranche from a bailout package, which Islamabad says is desperately needed to stabilize the country's struggling economy.

In May 2019, Pakistan reached an agreement with the International Monetary Fund (IMF) after months of difficult negotiations on a $6-billion (€5.34 billion) bailout package.

The 39-month bailout program is subject to regular IMF reviews of Pakistan's economic policy and growth.

In January 2020, it the program was put on hold after Prime Minister Imran Khan did not follow IMF recommendations to increase electricity prices and impose additional taxes.

In March 2021, the IMF released a $500 million tranche, but talks in June to release further funds were inconclusive.

Pakistan's economy contracted by 0.47% in 2019-20 during the coronavirus pandemic, which hobbled the already weak economy.

When the IMF agreed to the so-called Extended Fund Facility (EFF) for Pakistan in 2019, IMF acting managing director David Lipton, said that "Pakistan is facing significant economic challenges on the back of large fiscal and financial needs and weak and unbalanced growth."

Prime Minister Khan's top finance adviser, Shaukat Tarin, said this week he was optimistic that the latest round of negotiations on economic reforms with the IMF would result in the disbursement of the $1 billion tranche. In total, Pakistan has so far received $2 billion via the EFF.

IMF conditions could come down on Pakistanis

Miftah Ismail, a former Pakistani finance minister with the opposition Pakistan Muslim League party, told DW that the IMF is demanding a 1% tax increase, to make up for decreases in taxes from Khan's government in 2018.

"Khan should improve tax collection without imposing new taxes or increasing tax rates, like our government did in 2013-18. But at this point to raise taxes or levies on things like petrol or diesel or increase power or gas tariffs will be disastrous for the people," said Ismail, who was a member of former Prime Minister Nawaz Sharif's government. 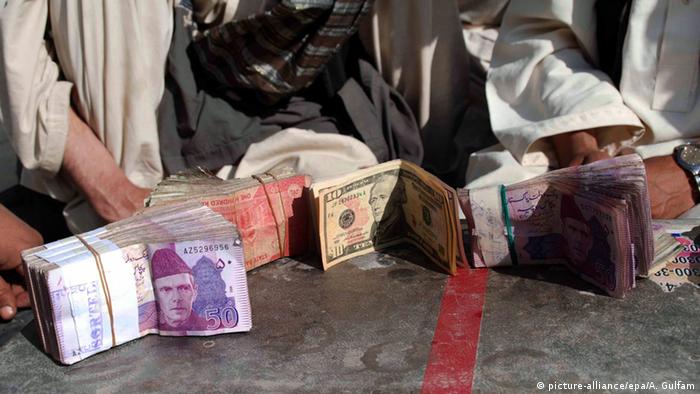 Pakistani economic analysts say they're concerned Pakistan's reliance on the bailout package will put the economic policy in the hands of the IMF.

"Reports of energy companies responsible for supplying electricity and gas continuing to run at a loss, has put the spotlight once again on the issue of a Pakistani government failing to tackle these difficult problems in a meaningful way," he said.

"I think Islamabad needs to envisage the basics of lending and borrowing here. A borrower with a frail economic outlook can never be in a position to effectively negotiate about the conditions attached with the debt," Ayesha N. Rao, a professor in the economics department at the National University of Sciences and Technology in Islamabad, told DW.

"The IMF is going to put Pakistan under aggressive taxation regimes to enhance Pakistan's debt repayment capacity," she added.

Along with tax increases and higher energy prices, Pakistani's are also facing rising inflation, as the purchasing power of the rupee decreases. Pakistan's inflation rate hit 9% at one point this week, according to the Pakistan Bureau of Statistics. The rupee also traded at record lows against the dollar.

"Inflation in Pakistan is already the highest in the [South Asian] region," said Ismail.

At his meat shop in Islamabad, butcher Afaq Ahmed said no customers are coming in, as a full cow and goat hang from an iron hook.

"People can’t afford meat at an expensive rate," he said. "I voted for Imran Khan in 2018 and I am regretting my decision. Before his government things were going good but there is tension everywhere now," he told DW. 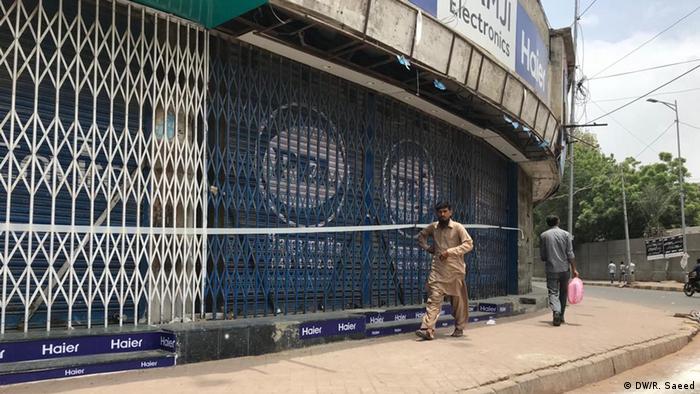 In July, shopkeepers in Karachi closed their doors in protest of an IMF budget

"Increased economic hardship in the wake of inflationary pressures at the household level will push people, primarily women, to take up precarious work which is often poor-paying, poorly monitored in terms of safety, lacks worker benefits and generally increases their time-poverty," Hadia Majid, an economics professor at Lahore University of Management Sciences (LUMS), told DW.

"It is clear as crystal that inflation is going to increase further," said Rao. She added that soaring energy prices are having a direct effect on the prices of general commodities.

"Price control is really a gigantic task for the government in this gripping scenario," she added.

As Pakistan's economic problems turn into a political liability for Prime Minister Khan, analysts said they are noticing tanking public approval ratings for the government.

"Recent surveys indicate more than 90% of the public dislike this government over its poor economic performance," Murtaza Solangi, a political analyst, told DW.

"Things are not going in the favor of this government as people's anger has erupted," he added.

Analyst Bokhari said that Khan is "today more vulnerable to inflation than at any other time in the past."

"A growing number of people across Pakistan are now complaining of inflation in a way that has not been seen in a long time," he said.

"Khan's opponents will definitely use this issue against him in the next election campaign," he added.

"Pakistan is a resourceful country with a very industrious people, and our future is very bright. But Imran Khan is politically dead after the epic incompetence his government has exhibited," said opposition politician Ismail.

How the COVID-19 crisis is affecting Pakistan's economy

Pakistan's already fragile economy had only just been moving towards stability when the health crisis struck. Experts fear that the pandemic's economic fallout will considerably derail the country's recovery process.