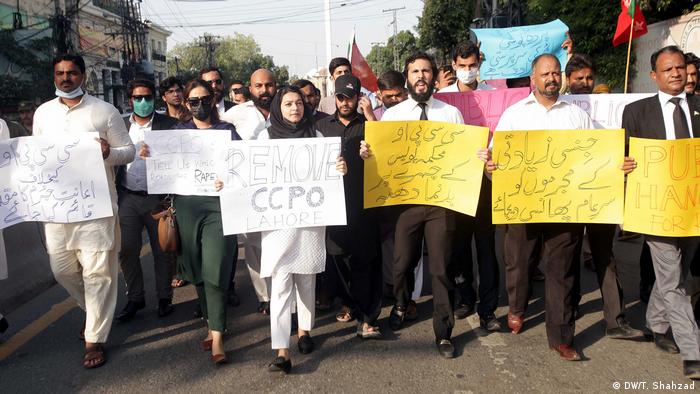 Thousands of protesters, many of them women, took to the streets in several Pakistani cities on Saturday in another round of demonstrations to voice anger at the handling of an investigation into the gang rape of a woman on a highway near the eastern city of Lahore.

The woman was raped at gunpoint on overnight to Wednesday by two men before the eyes of her children after her vehicle ran out of fuel. The two men are also said to have stolen money and jewelry before fleeing the scene.

Protesters called for the sacking of the lead police investigator assigned to the case, who has made a number of remarks blaming the woman's own actions for the crime committed against her.

Omar Sheikh said the fact that she had traveled at night and not made sure her vehicle had enough fuel were mistakes on her part. He also said it had been an error for her not to take a busier highway.

The protests come as police announced they had identified the two suspects through DNA tracing.

"I am hopeful very soon we will reach them and arrest them," said Inam Ghani, the inspector general of Punjab province, where the crime took place.

Global rights groups say Pakistan must do more to protect women against violence and to make sure perpetrators are brought to justice.

Although gang rape is reportedly rare in Pakistan, nearly 1,000 women there are killed each year in so-called honor killings for having allegedly offended against conservative morals.

Read more: Pakistan: How to approach the issue of rape amid a political controversy