A Sri Lankan factory employee was beaten to death and set on fire by an angry mob in Pakistan's Sialkot. Police say the violence was triggered by allegations of blasphemy. 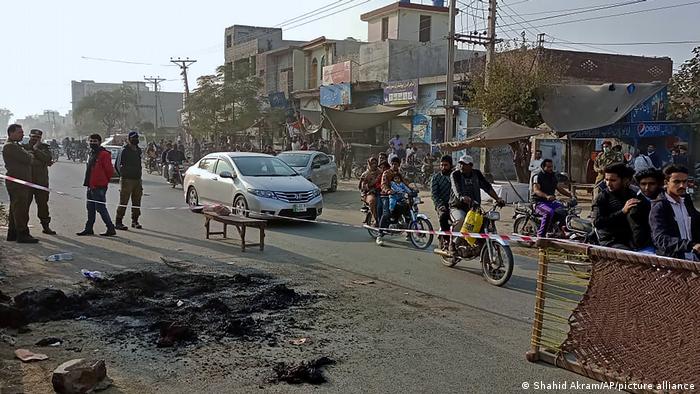 The man was dragged out of his place of work, allegedly by factory workers

A crowd of people took part in an apparent lynching in northeast Pakistan on Friday, beating a Sri Lankan man to death and then burning his body, police said.

Pakistan daily Dawn said he worked as the export manager of a factory in the industrial city of Sialkot, where the killing took place.

Videos and images from the scene circulated the social media, with some members of the mob taking selfies in front of the victim's body.

What triggered the lynching?

But other police representatives stopped short of confirming this account and said investigators were still gathering information about the cause of the incident. Police deployed a large contingent of forces to reestablish control over the area.

How have officials reacted?

Pakistani Prime Minister Imran Khan said he was overseeing the inquiry into the killing and that all involved "will be punished with full severity of the law."

"The horrific vigilante attack on factory in Sialkot & the burning alive of Sri Lankan manager is a day of shame for Pakistan," he said on Twitter.

"It is a barbaric act and against Islam's teaching," he said of the Sialkot lynching.

The chief minister of Punjab, Usman Buzdar, said that "no one is allowed to take law in their hands."

"I am extremely shocked at the horrific Sialkot incident," he wrote on Twitter. "Rest assured, individuals involved in this inhumane act will not be spared!"

Blasphemy charges are often enough to prompt mass violence in Pakistan. Observers claim such accusations are often weaponized to settle personal scores in the conservative Muslim nation, especially against minorities.

Human rights activist Hina Jilani said such lynchings were quite frequent in Pakistan "which should be alarming for the society and the state."

"There are several laws already but still there is no safeguard to the minorities and citizens, and unless the state does not formulate any social policy things will not get better," she told DW.

The latest death comes only days after an angry mob set fire to a police station, police checkpoints and parked cars in Charsadda, near the city of Peshawar, demanding that the police hand over a man suspected of burning a copy of the Quran.