Several police officers who were seized by anti-France demonstrators from radical Islamist group TLP have been freed. Protesters want the French ambassador to the country expelled in an ongoing dispute over blasphemy. 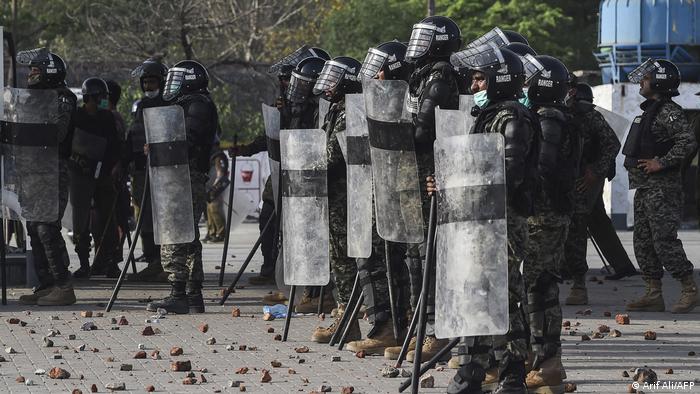 Pakistani officials on Monday said 11 policemen captured by the supporters of a radical Islamist party had been released.

Party followers have vented their fury since the leader of the now-banned Tehreek-e-Labbaik Pakistan (TLP) — who was set to lead anti-France protests — was detained last Monday.

What happened to the officers?

Followers of the TLP seized the officers as hostages on Sunday during violent protests in the city of Lahore.

Pakistani Interior Minister Sheikh Rashid Ahmed said the police had been released early Monday after "negotiations" with the TLP.

"Negotiations have been started with TLP; the first round completed successfully," Rashid said in a video on Twitter. "They have released 11 policemen who were made hostages."

Rashid said a second round of talks would take place later Monday, although anticipated content was unclear.

Social media footage had earlier shown some of the officers appearing bloody and bruised, with bandages around their heads.

Why are the TLP supporters protesting?

The TLP has led an anti-France campaign for months, including calling for the ambassador to be expelled. In October, Pakistan's Parliament backed a resolution for the expulsion to take place by April 20.

Prime Minister Imran Khan on Sunday suggested the party hadn't been banned for its ideology, but rather its methods.

"Let me make clear to people here & abroad: Our govt only took action against TLP under our anti-terrorist law when they challenged the writ of the state and used street violence & attacking the public & law enforcers," Khan tweeted.

Police and protesters die in unrest

Protests in Pakistan have paralyzed several cities and led to the deaths of six policemen.

The TLP leadership said several party supporters were killed in clashes on Sunday.

"We won't bury them until the French ambassador is kicked out," said Allama Muhammad Shafiq Amini, a TLP leader in Lahore.