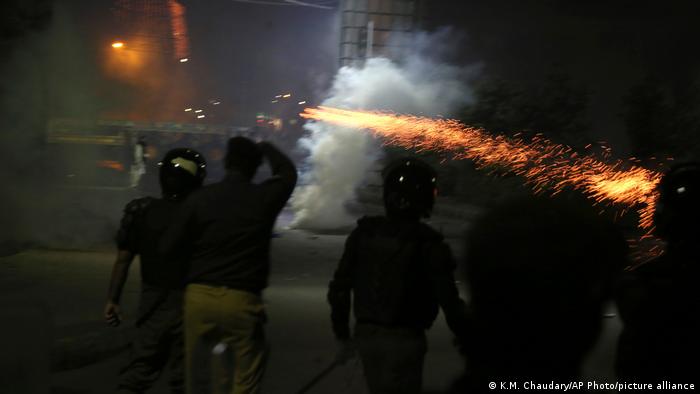 At least two police officers and two demonstrators were killed in Lahore, Pakistan, on Friday when a protest staged by hardline Islamists turned violent.

Thousands of members of the outlawed Tehreek-e-Labbaik Pakistan (TLP) party were participating in what they called their "Long March," hoping to walk all the way to the capital, Islamabad, nearly 300 kilometers (186 miles) away. Local and national security services had been deployed in an effort to keep them from leaving Lahore, including blocking the main highway to Islamabad with shipping containers.

The demonstrators were hoping to reach Islamabad and put pressure on the government to release their leader, Saad Rizvi, from prison. Rizvi was charged under anti-terrorism laws following violent protests that erupted in Pakistan last year after caricatures of the Prophet Muhammad were published in France.

TLP has a long history of elaborate protests and sit-ins to try and get successive governments to give in to their demands. Six police officers were killed in April when the TLP staged days of rallies that paralyzed roads.

For the past several years, their political campaigning has focused on supporting Pakistan's controversial blasphemy law that calls for anyone who publicly insults Islam to be put to death.

Violence erupted when police tried to bar the marchers from leaving the Lahore. Rizvi issued a statement saying that his party had been demonstrating peacefully before officers threw tear gas cans at them.

The deadly clashes came at a time when support for Prime Minister Imran Khan is plummeting amid rising food and fuel prices and the ongoing coronavirus pandemic. Khan was visiting Lahore on Friday when the protest began.

Pakistan's business community has expressed concern over a possible revocation of the EU's preferential trade status. The country's economy is under pressure from the COVID crisis and the government's mismanagement.