Six men have been sentenced to death in a secret military court in Pakistan. The men were convicted for involvement in a Taliban massacre of school children. 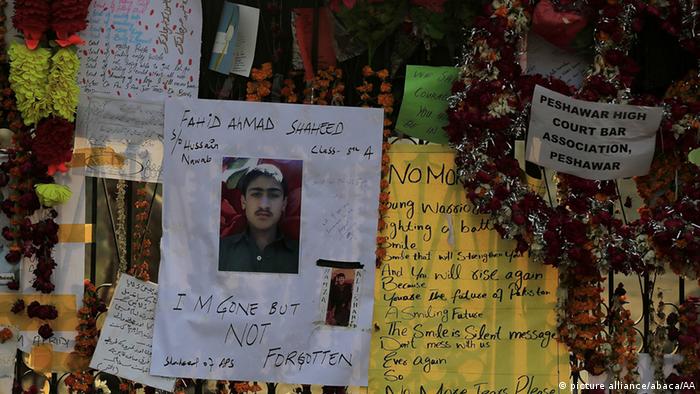 The sentences are the first known convictions for the Taliban massacre of 134 children at an army-run school in Peshawar last December.

The military said that they were civilians who were convicted of aiding six gunmen who attacked the army school. They all confessed before the court, according to a statement from the military's press wing.

Parliament in January approved military courts to try accused militants because the government argued that civilians were afraid to convict them.

"The convicts were given fair trial by following all the legal formalities and offering/providing them legal aid and defence councils," the statement said.

"Today, the sentences of death have been confirmed by the Chief of Army Staff." It added that the condemned had the right to a hearing before a court of appeals.

Following a legal challenge on parliament's decision in January, Pakistan's Supreme Court ruled last week that closed military courts are legal and can pass death sentences on civilians. It is a judgment that critics say further strengthens the military's grip on power at the expense of civilian authorities.

According to the law ministry, military courts have heard the cases of at least 100 militants since January. However, little information has been released on the identity of any suspects or convicts, nor charges and evidence against them.

Afghan authorities have arrested five men accused as accomplices in the December massacre at a school in Peshawar, Pakistan. The Taliban carried out the strike, which killed almost 150 people, most of them children. (17.01.2015)

At least six people have been arrested in connection with the recent unprecedented Taliban attack on a school in Pakistan. The interior minister told the press that his country was at war with anti-government militants. (22.12.2014)