Paderborn's adventure comes to an end

Emotions ran high in Paderborn as the smallest Bundesliga side was relegated. DW's Jonathan Harding experienced the drama and the highs and lows of the final day at the Benteler Arena. 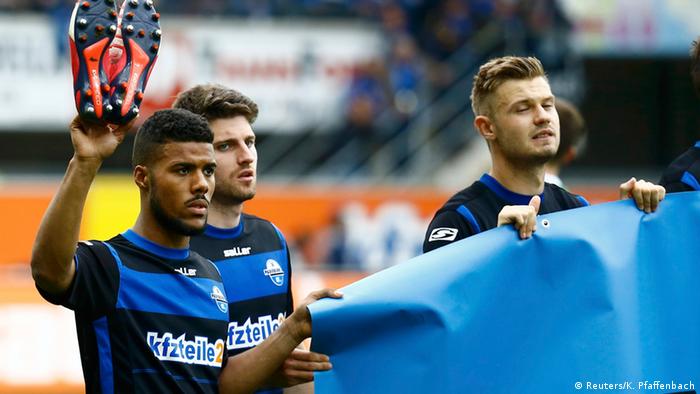 Even though the majority of the 15,000 home fans knew what was coming, the support never dimmed. They were going to enjoy their final 10 minutes of Bundesliga football.

It had been an adventure, one that has left marks in the small place. A growing community, Moritz Stoppelkamp's record goal, and a brave style under a developing coach – all of it belongs to Paderborn. And they'll never lose that.

It had all started so perfectly for the home side too. The returning Marc Vucinovic curled in at the back post to score the club's fastest ever Bundesliga goal four minutes in and convert the home fan's faith into genuine belief. Ecstasy followed and it was hard to hear the Stuttgart faithful, who had travelled in numbers.

The early goal might have excited the crowd but it didn't settle the nerves. Stuttgart pressed. Martin Harnik headed over, Stuttgart's attacking trio overplayed a chance and then Daniel Didavi had a header saved by Lukas Kruse. The away fans stayed loud and lit so many flares the stadium announcer's patience grew thin.

Uwe Hünemeier tried to clear it and although he didn't score in the wrong net as he did last weekend against Schalke, he did assist Daniel Didavi to slam the ball home ten minutes before the break. Minutes later, Martin Harnik missed – what is quickly becoming an unwanted habit – a sitter at the back post. 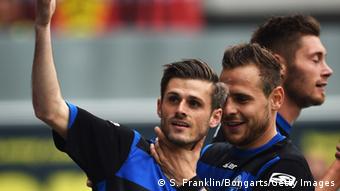 Vucinovic's early goal sent the home fans into raptures, but that quickly dissipated

Paderborn were crumbling and Daniel Ginczek really should have stuck the knife in, but after dancing through a sleepy home defense the striker put the ball wide of the far post.

With no goal updates from elsewhere, there was only the quiet hum of the fans checking scores. That hum became a gasp when news of a Hamburg goal came through. The pressure went up another notch, and with it came the rain.

Gentner drilled wide when it seemed easier to score. Moritz Stoppelkamp failed to connect in the box after a beautiful cross from the right. It was a relegation battle all right: Plenty of effort and not much quality.

Then came the killer blow: news of a second goal for Hamburg. At that point, it left Paderborn facing relegation. While a lead would have given them two extra points, they were 22 goals short. The crowd knew it too. The earlier delight had turned to nervous support, that you could feel was fading.

It was up to Stuttgart now. More chances came and went, the season looked to be following suit. Inside the final 20 minutes, Ginczek finally converted and Stuttgart were alive again. The striker rounded Kruse and slid home. More flares and pandemonium followed in the away block.

This time the stadium announcer didn't have anything to say.

The Bundesliga season is over. Whilst the relegation battle ran on, the rest of the league were fighting to finish as high as possible. Borussia Dortmund, Bayern Munich, Frankfurt and Augsburg all ended with wins. (23.05.2015)