Outrage over sexual abuse sparks debate on public transport | World| Breaking news and perspectives from around the globe | DW | 17.02.2015

The murder and attempted rape of a young Turkish student has sparked a worldwide debate on violence against women. Social media users also raised the question of how to provide safer public transport for women. 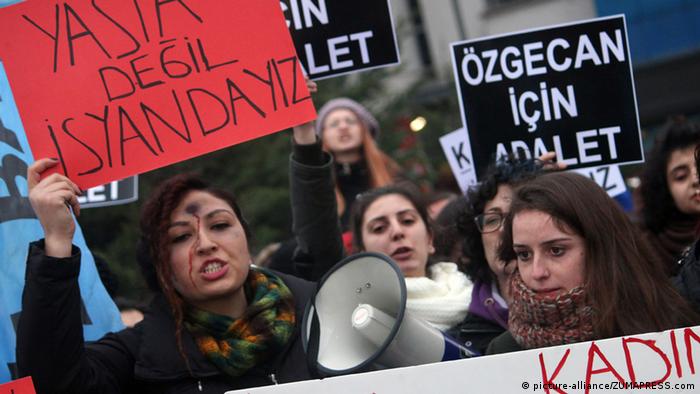 Özgecan Aslan's burned body was discovered on Friday after she had been missing for two days in Turkey's southeastern province of Mersin. According to the Turkish newspaper Hürriyet, she was taking a bus home when the driver tried to rape her. When she resisted, the driver, who has now admitted the crime, stabbed Aslan and hit her over the head.

On Sunday, Turkish women posted their own stories of sexual harassment on social media under the hashtag "sendeanlat," or "you tell it too."

Turkey is no exception

The Turkish incident calls to mind of the 2012 Delhi gang rape in India, where a 23-year-old physiotherapy intern was gang raped on a bus. She was beaten with an iron-rod and subsequently succumbed to her injuries. The case led to widespread outrage in India and brought about new ideas.

The idea of female-only transportation is not a new one in India, but the 2012 'Delhi gang-rape' brought forward new initiatives for safer transportation. India is home to commuter trains that have special compartments for female passengers. Additionally, the so called “Ladies' Special Trains”, where the entire train is reserved for women, run at peak hours when the trains are particularly crowded.

According to surveys the demand for these kind of services is increasing in India. This also brought rise to women-only taxis, such as SheTaxi, which was started in 2013.

In December 2014 the cab service became even more relevant after a male driver who ran a taxi service under the app-based Uber platform, raped a female passenger.

In March 2014 Pakistan, which had abandonned the idea of women-only transport, decided to give it a second chance.

Three pink buses were introduced for public transportation of females-only in Lahore but two were withdrawn due to lack of female commuters.

Not only a third world problem

Following its Indian example, the SheRides startup was launched in New York and and its surroundings in October 2014. The app-based car service for women, that only employs female drivers is similiar to Uber or Lyft but distinguishes itself because it caters to the women-only transportation idea. According to reports the demand has so far been high.

For many who experience abuse, reporting the incident to the police is no easy choice. It is often cumbersome, in many cases also involves insensitive questioning and in some cases, the victims are blamed for the crime themselves. To counter this, the New York City Metropolitan Transit Authority (MTA) launched a website on which people can report incidents of sexual harassment anonymously.

In Colombia's capital, Bogota, authorities took the matter into their own hands and placed undercover policewomen into the buses and station, to report and arrest perpetrators.

As such, services like SheTaxis or pink buses can be seen as an initial step toward bringing about structural change. But as many social media users point out, the ultimate goal is to change the root cause of the problem - namely the lack of respect shown toward women.

Taking a stand against everyday sexism

After being harassed on a bus, one young Londoner started asking other women whether they’d experienced sexism. The response was overwhelming, and her project is now even attracting the attention of policymakers. (25.06.2013)

Standing up to everyday sexism