Our host Peter Craven speaks with Volker Schlöndorff about his work, the ‘50s, and German film. 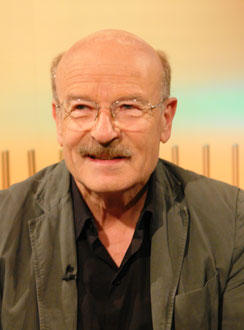 Volker Schlöndorff is one the most famous German film directors. He gained international fame in 1979 for his adaptation of ”The Tin Drum”, which also won him an Oscar for best foreign-language film.

Volker Schlöndorff was born on March 31, 1939, in Wiesbaden. At age 5, the loss of his mother, who died in an explosion involving liquid floor polish, was the defining trauma of his lifetime. He described his memories of the time in his autobiography: "Mom stood burning in the kitchen ... I didn’t see it, someone had barricaded us in the children’s room. I only remember how my fists pounded on the closed door, behind which the awful event took place." Schlöndorff’s father, a doctor, was left to raise Volker and his two brothers alone.

Post-war Germany quickly became too confining for Schlöndorff. "The American civilization had more to offer us than our German heritage." In his hometown’s America House, he discovered literature – as well as film. In 1956, however, he traded France for America as an exchange student at a Jesuit school in Bretagne. Three years later in Paris, he finished his baccalaureate. After that, he studied political sciences in Paris and attended the Institute for the Advanced Cinematographic Studies, where he was one of 11 selected from 300 applicants. More valuable to him than film theory was Schlöndorff’s work with great French directors of the time: Louis Malle, Alain Resnais and Jean-Pierre Melville – with them, he learned the craft as a director’s assistant. Schlöndorff’s father, however, was against a film career and tried, in vain, to intervene.

With the 1966 production of "Der Junge Törless," based on a Robert Musil novel, Schlöndorff tasted international success for the first time. It was the beginning of a great career in film adaptation. Together with like-minded colleagues, such as Fassbinder, Verhoeven, Hauff and others, author-cinema used decidedly political films to rebel against "grandpa‘s cinema," a dismissive term for the light-to-superficial entertainment films of the ‘50s and ‘60s.

For Schlöndorff, filmmaking has always been an attempt to find answers to a single question: How could the German people submit to fascism so easily? He found solutions in literary models as he was always in search of "Elective Affinities."

His cinematic trademark was thus, first and foremost, literary films. His best films were modeled after books, among them such well-known and prominent works as 1975‘s "The Lost Honor of Katharina Blum," adapted from Heinrich Böll, which Schlöndorff filmed together with his first wife, director Margarethe von Trotta. Or in 1978, "The Tin Drum," adapted from Günter Grass, for which he received the Golden Palm prize at the Cannes Film Festival in 1979, together with "Apocalypse Now" from Coppola. A year later, the film was also the first German work to receive an Oscar since 1927.

Common leitmotifs in many of his films include denial and protest. "The resistance of the individual in a largely dead-end situation. A revolt that always comes too late, because it happens as the final push against a long-suffered powerlessness."

Hollywood took quick notice of Schlöndorff after his Oscar award. He went to the United States for five years and "made it" there, one of few Europeans to do so. During this time, he produced three films. Among others, "Death of a Salesman" in 1984, an adaptation of Arthur Miller featuring Dustin Hoffman and John Malkovich, as well as "The Handmaid’s Tale" from 1990, based on a Margaret Atwood novel. The script was written by Harold Pinter and featured Robert Duvall, Faye Dunaway and the late Natasha Richardson.

Other popular films were 1990‘s "Homo Faber" based on Max Frisch’s novel, as well as "The Legend of Rita," which Schlöndorff presented at the Berlinale film festival in 2000.

Thereafter, the "bonafide craftsman" failed to experience further success. The film adaptation of Michel Tournier’s prize-winning novel "The Ogre" in 1996, featuring John Malkovich, was panned by critics. His most recent film, "Ulzhan" received critical acclaim but, with only 17,739 viewers, was an absolute flop at the box office.

From 1992 to 1997, Schlöndorff was head of the film studios at Potsdam-Babelsberg – something he later described as the big mistake of his life.

The director made headlines once again as his production company Constantin Film released the film "Pope Joan," which he spent seven years working on. The alleged reason: a shattered sense of confidence. Schlöndorff made critical statements in newspaper articles about the fusion of film and television, as well as the production forces behind it. The director took time to write his memoirs, which featured a hard look at himself and his life’s work – "Light, Shadow and Movement: My Life and My Films" from 2008. One critic claimed that Schlöndorff had led a relatively quintessential life in the German republic – having lived through the post-war era, the German student movement and other pivotal historical events.

The filmmaker got tongues wagging again at the end of 2008, when he characterized all former East German DEFA films as terrible, drawing massive protest from numerous members of the East German film world.

Schlöndorff was married for 20 years to actor and director Margarethe von Trotta. His second wife is Angelika Schlöndorff. He has one daughter.