On the latest edition of ”Talking Germany,” our host Peter Craven will welcome DW-TV presenter Birgit Keller. Together they’ll discuss the former East Germany, West Germany and everything in between. 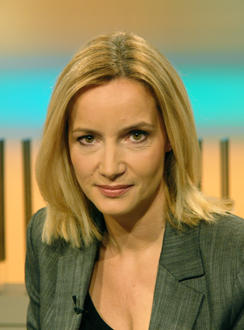 Birgit Keller is a presenter of DW-TV’s news program ”Journal.” The Schwerin native grew up in communist East Germany. The years after German reunification Birgit Keller spents as a trainee, first at private broadcaster Sat.1 and later as a freelance journalist for public broadcasters ORB and MDR. Today, she lives with her husband and their two daughters in Berlin, where she spends every spare moment trying to get back to nature. Keller is also an avid painter and photographer. ”Curiosity and an interest in what’s going on in the world” – those factors drove Birgit Keller toward a career in journalism. Raised in communist East Germany, her thirst for information, for opportunities to form her own opinion on her own terms, grew ever greater after Germany’s political reunification. She happily accepted an offer from Sat.1 in Berlin to enter a training-on –the job program in journalism in 1992. Later, she worked with the channel as a reporter and news editor, a time that also gave her experience in front of the camera.

Keller has been a freelance journalist since 1994. She has worked for news programs for a number German broadcasters, including ORB and MDR.

At international broadcaster DW-TV, Keller took on fresh challenges, where she works as a presenter for the “Journal.”

Keller completed a degree at Schwerin’s technical college, as well as training in advertising sales. She lives with her two daughters in Berlin.