The widely acclaimed film is based on a 2015 terrorist attack on a bus in northern Kenya. It tells the moving story of Muslims shielding Christians from the militants who were planning to murder them. 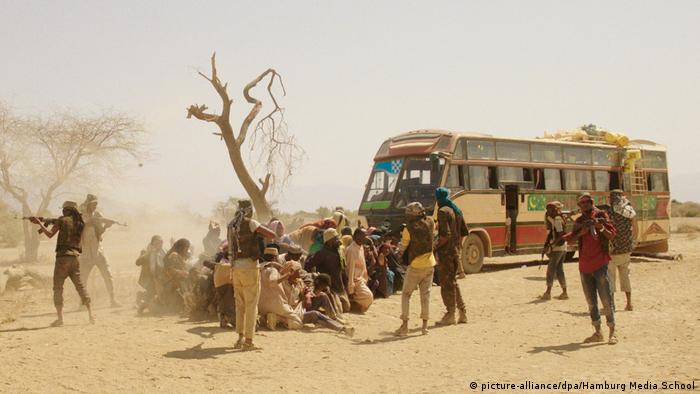 The Kenyan film "Watu Wote" ("All of Us") has been nominated for an Academy Award in the category Best Short Film. Directed by upcoming German filmmaker, Katja Benrath, it was produced by Bramwell Iro and Matrid Nyagah of Lightbox Africa and Tobias Rosen from the Hamburg Media School. The announcement came shortly before the film's Nairobi premiere.

The Oscar nomination is the latest honor for the film which has already received numerous awards, including a Student Oscar, the German Newcomer Award for Cinematography and first prize at the Brooklyn Film Festival. In a tweet posted after the nomination, the film crew expressed their delight and gratitude.

Read more: African stories on movie screens around the world

One of the actors, 34-year-old Anthony Ndung’u who lives and works in Nairobi was also an integral part of the much-acclaimed DW radio production "Learning by Ear". For example in the crime series "Crime fighters", he acts as the commissioner who investigates a murder case that was triggered by false information on the internet. ("Many facts, one truth").  And in "The secret of the bones" he plays a doctor who reveals the evil machinations of a self-proclaimed healer.

Krysteen Savane, the production manager, for many years was also part of Learning by Ear radio drama series cast. She also lives in Nairobi and works for non-governmental organizations "One Fine Day" and "Annos Africa", which offer classes in creative writing, ballet dance and visual arts to children and teenagers in Nairobi's largest slums of Mathare and Kibera.

Based on true events

One of the film’s producers, Bramwell Iro, told DW about the events that inspired the film. "The story is a story about humanity. It’s about people’s love for each other. It's based on true events. In December of 2015 there was a bus attack on the way to Mandera. And in this particular bus, al-Shabab militants got in and asked the Christians to separate themselves from the Muslims, so that they could kill the Christians and let the Muslims go. But what happened is probably something that has not been recorded before. The Muslims on the bus just said 'no, we’re not going to separate ourselves from our brothers and our sisters.'"

Two people were killed in the attack, but the extraordinary act of bravery resulted in the militia giving up and allowing the bus to continue its journey. Director Katja Benrath told DW why she thinks the film has been so successful. "People want to hear stories about kindness and solidarity. So let’s try to…tell more of them, because I think that’s how we can change reality."

Actor Anthony Ndung'u has hopes that the film will have political consequences. "It is very relevant, especially in those parts of the country in the northeastern province where there are blasts, I mean grenade attacks. So we hope that maybe this movie might jolt the government ... after the attack happened, it never did anything. We hope that the movie might at least push them to do something," he told DW.

The film's success has been celebrated by the Kenyan Film Commission, who were quick to tweet the news of the nomination.

Actor Charlie Karumi told DW how it felt to be nominated for an Oscar. "We're excited. I think the whole industry is excited. The cast and crew are excited. We will be going to the Oscars!"