The International Ski Federation has been criticized for allowing the women's slopestyle final to go ahead despite high winds. The swirling winds have caused the FIS to postpone men's and women's downhill skiing events. 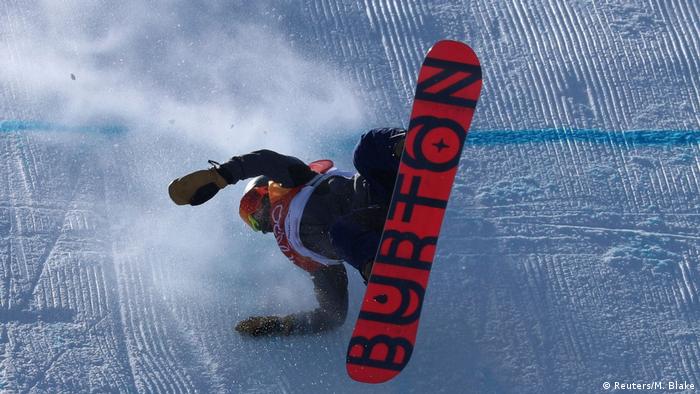 The swirling winds at Phoenix Park, where the snowboarding events are being held, caused almost all of the athletes to crash at some point during Monday's slopestyle final. The contest went ahead an hour after it was scheduled to start, as organizers waited in vain for the winds to calm down. They had already been forced to scrap Sunday's qualifiers due to the winds.

Jamie Anderson of the United States defended the slopestyle gold she had won at Sochi four years ago, making her the first woman to win two Olympic titles in snowboarding. Canada's Laurie Blouin took the silver, while Enni Rukajarvi of Finland captured the bronze. However, the only thing the athletes wanted to talk about after the final was over, were the dangerous conditions caused by the high winds. In fact, only five of the 25 snowboarders made it down the first run without falling and none completed two error-free runs.

Final 'should have been postponed'

"Yes it should have been postponed," said Austria's Anna Gasser, who was one of the favorites going into the final. "We tried to speak to officials but the Olympics put us under pressure to do it today. They said we had to do it today but we have three weeks (to run the event)."

Bronze medalist Rukajarvi concurred with Gasser, when asked whether organizers had made the right decision.

"It wasn't. It was better in the practice, but then it got really bad, so they should have cancelled it or moved it." 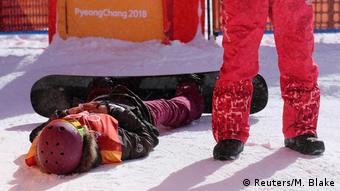 Silvia Mittermüller didn't make it to the final

She also noted that she was "most happy that nobody got hurt really bad". While strictly speaking, this was the case in the final, Germany's Silvia Mittermüller was among three snowboarders who were so seriously injured in training that they had to pull out.

Mittermüller was caught by a gust as she was about to land, resulting in a torn meniscus in one of her knees. Australia's Tess Coady also suffered a serious knee injury in practice, as did Katie Ormerod of Britain.

The International Ski Federation (FIS) issued a statement defending its decision to go ahead with the final.

"FIS always aims for the athletes to be able to stage their best performances, which some athletes have expressed was not the case today," it said. "But the nature of outdoor sports also requires adapting to the elements."

In Alpine skiing, however, the FIS appears to be taking no chances, having announced on Monday that it had postponed the women's giant slalom to Thursday – as it had already done with the men's downhill.

While the women's giant slalom has been postponed, there are still seven gold medals up for grabs on Medal Monday. Stay up-to-date with the latest action from Day 3 of the Winter Olympics here! (12.02.2018)

Top moments at the Winter Olympics

The Pyeongchang Olympics are underway and there are medals up for grabs. Athletes from around the world will skate, ski and bobsleigh their way into Olympic history. Here are some of the best moments from the Games. (11.02.2018)