Opinion: War is no remedy for terrorism

In his address to a joint session of both houses of the French parliament, Francois Hollande declared war on terrorism. Strong words like these can turn into a political trap, says DW's Barbara Wesel. 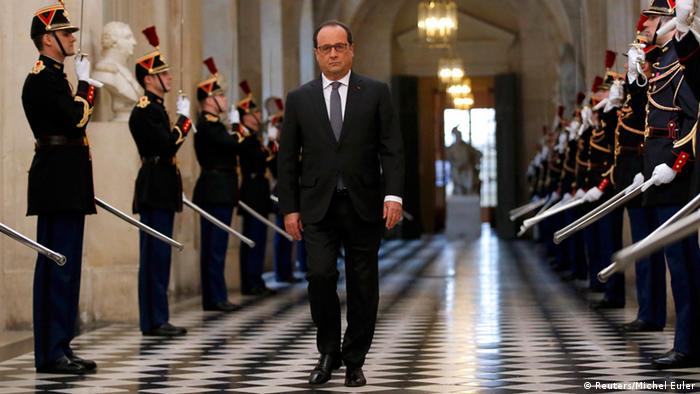 Of course, the French president must appear strong and decisive in his first speech after the Paris attacks. His citizens expect that of him. They also want to be protected against terrorism, insofar as it's possible - the French are realistic about this. So the majority of people won't object to his list of concrete measures, from the ban on terrorist suspects entering the country to extending the state of emergency.

State must regain monopoly on use of force

Without a doubt, the French government must put its house in order. This would include, for example, a systematic hunt for weapons. The state must regain its monopoly on the use of force: It cannot continue to be afraid of the so-called no-go areas in the suburbs. This is especially true of the criminal scene there, where it seems that the step from armed robbery to terrorist attack is a small one. This was already apparent after the attack on "Charlie Hebdo" in January: One of the perpetrators evolved from a small-time criminal to a mass murderer, a pattern that has been repeated in the current series of attacks.

Yet there was something missing in the president's announcements. Our societies have tolerated the hate preachers and their violent fantasies for far too long. This cultural tolerance was a mistake. Anyone who preaches hatred and violence against us, the so-called unbelievers, should see his mosque closed down and boarded up. The congregation should find itself an imam who preaches the faith, not murder. Other necessary steps include decisive action against online instruction manuals on shooting and bomb-making, and convincing major Internet companies in the United States to help at least partly stop their spread.

'War on terror' is the wrong rhetoric

But some of what Hollande said was right, especially when he spoke about the strength of France's liberal culture. Some of what he said was necessary, as far as security measures are concerned. And some of what he said was wrong; namely, that he wants to wage war on terror. This is the same political trap former US President George W. Bush fell into. The consequences of Bush's mistake prepared the ground for the seed of violence now sprouting in the Middle East. The French president knows this, because his predecessor Jacques Chirac was smart enough to distance himself from the war in Iraq. Why is Hollande now using the same misguided rhetoric?

It isn't necessarily wrong to deploy the military to dig the "Islamic State" (IS) out of its positions. But the war cannot be won from the air alone if eastern Syria and parts of Iraq are to be liberated from their terrorist rulers. Above all, it would require too many civilian casualties. Whatever a coalition of ground troops there might look like, initial pacification of these regions will not be achieved without it.

Enough double-dealing with the Saudis

A French commentator wrote: We kill the badly dressed extremists, and we flatter the ones in elegant clothes. These words were aimed at Saudi Arabia. France and its European allies must finally put a stop to their hypocritical dealings with the sheikhs. These have raised a brood of dragons that are now attacking us in our cities with Kalashnikovs and suicide belts. It's time to put the kingdom and its vassals under such political and economic pressure that they finally stop financing our murderers.

This is the key element that was missing from the French president's speech. He has to set an example, and position French foreign policy in opposition to the financiers of terror. The evil of IS terrorism must be dug up at the root, and primarily in Saudi Arabia.

Speaking in Paris, US Secretary of State John Kerry has pledged support for France and vowed to defeat the "Islamic State." Authorities in Belgium are continuing their hunt for the main suspect behind Friday's attacks. (17.11.2015)

Following the deadly attacks on Paris by the "Islamic State," Europe's far-right has demanded a stop to the continent's influx of refugees. The United Nations has warned that the demands are "not the way to go." (17.11.2015)