A year ago, Volkswagen had to admit it had rigged emissions in its diesel models in the US. Since then, the German carmaker has been fighting to win back lost confidence. A long road lies ahead, writes Henrik Böhme. 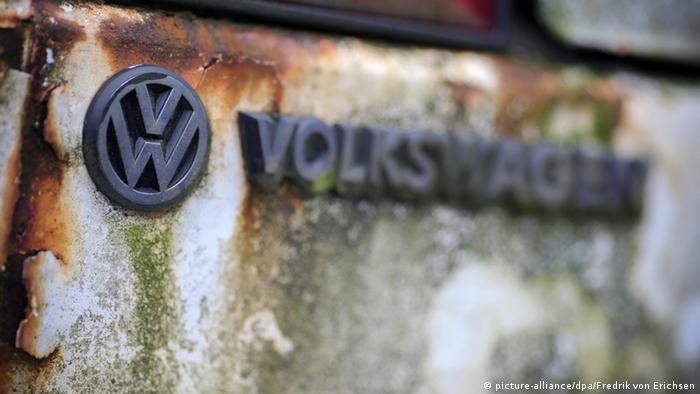 Sometimes you get the impression people at Volkswagen are happy about the "diesel matter," as the emissions-rigging scandal has euphemistically been dubbed at VW's headquarters in Wolfsburg, Germany. The crisis has "opened new doors," CEO Matthias Müller said a few days ago at a staff meeting at VW's home plant.

That may be one way to look at it, but there is no guarantee Europe's biggest carmaker will come out of this crisis stronger. A year ago, the company was the most successful global player in the automobile industry, and it was anything if not ambitious.

It was obsessed by the preposterous idea of becoming the global industry's number one. And it was organized like the Russian Empire under the czars, with CEO Martin Winterkorn at the top and everybody else far below. Since then, the scandal has shaken the carmaker to its foundations.

Look at this bank!

We are talking about a company whose diesel Jetta TDI model was named the most environmentally friendly (!) car of 2007 by the US-based "Green Car Journal" because of its "revolutionary diesel technology." But this was only possible because VW had used cheating software. And that was detected only years later, in 2013, by researchers at West Virginia University.

It took two more years for Volkswagen to admit the emissions fraud. All this will not be forgotten by American consumers. They will make VW pay a heavy price for its betrayal and they will do so for many years to come.

Take a look at Deutsche Bank, once an icon of Germany's economy, forced to pay billions of dollars to atone for its misdeeds committed before the world financial crisis began. It has been confronted with a huge $14 billion claim by the US Justice Department to compensate for cases that happened 10 years ago.

Volkswagen's decision-makers should take a close look here. It is already clear that they will never again sell a diesel car in the US. The recent billion-dollar settlement is just the beginning. Many more US states will file lawsuits, followed by investment firms and pension funds.

In Germany, the legal battle has not even started. But when the first lawsuits are announced, there will be months of negative coverage - making all VW's efforts to win back trust difficult. With every headline, people will be reminded: These are the crooks who betrayed us!

Today, nobody can tell how much money VW will need to settle things and clean up this mess. The carmaker has put aside almost 17 billion euros, which is far from enough. If estimates of 35 billion euros prove to be true, VW will not make a profit for years.

But this money is badly needed to get in shape for the automotive future with electric cars and self-driving vehicles. Müller has put forward an ambitious plan. But a complete overhaul of such a complex corporation with 12 brands, more than 100 plants around the world and 600,000 employees will take more than just a year.

It will take time, patience and - of course - a lot of money. If every fourth car manufactured by the Volkswagen Group is powered by an electric motor, then one-quarter fewer combustion engines and conventional transmissions will be needed. An electric motor needs less maintenance and has fewer parts than an internal combustion engine. Thus, fewer workers are required to build it.

Caught in the crisis

So, a year on, Volkswagen is caught in a chokehold of its own making. An investigation is underway, but VW's US law firm won't be able to deliver a solution before the end of this year. But even this probe will open old wounds.

Product recalls in the US and Europe are underway, but many diesel owners are still waiting for an appointment at a VW dealership. Considering that the level of compensation for US customers is unthinkable in Europe, many VW owners here will feel like second-class customers - and rightly so.

It is amazing that car buyers are still keeping faith with Volkswagen. The dramatic decline in the core brand's sales many had feared never happened. That's the only sliver of hope VW can build on at the moment.

But Dieselgate will be the front-seat passenger in Wolfsburg for a long time.

Join the discussion and add your comment below. Thread closes after 24 hours.

A Volkswagen engineer has been indicted in a US federal court over the German automaker's emissions-cheating software. He pleaded guilty to conspiring to defraud American regulators and customers. (09.09.2016)

Volkswagen wronged European consumers when it rigged its diesel engines to emit more toxic gases than allowed and then lied about it in the company's advertising, an EU commissioner has told German media. (05.09.2016)

VW emissions scandal: one year on

EU Parliament: VW scandal must be cleared up quickly

COVID vaccine: WHO approves China's Sinopharm for emergency use 1h ago