There was no shortage of media speculation over how awkward Donald Trump and Angela Merkel's meeting would be. Instead, the two set a friendly and respectful tone — a good sign for both nations, says DW's Michael Knigge. 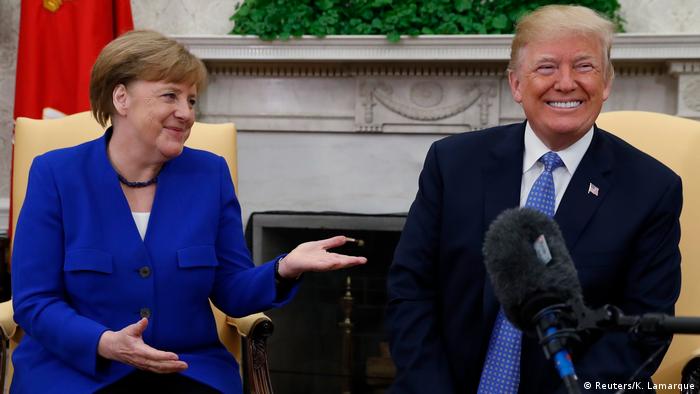 Let's dispose of the unavoidable comparisons between German Chancellor Angela Merkel's and French President Emmanuel Macron's back-to-back meetings with Donald Trump right away. Sure, Merkel, who was in Washington for a brief working trip and not an extended state visit, did not get a gun salute. She also did not get a tour of George Washington's Mount Vernon home and was not feted with a glitzy state dinner at the White House, either.

But here's a thought experiment: What would be the public perception of Macron's Washington visit without his rousing speech before Congress? Arguably, despite all the pomp and circumstance and the displays of affection between Trump and Macron, the publicly known tangible results the French president achieved during his meetings with his US counterpart don't look that different from what Merkel managed to do during her short stateside stint. Indeed, nothing concrete was achieved. As expected, both European leaders in their respective conversations with Trump had a hard time moving the needle on key issues.

Now let's get to the second unavoidable comparison regarding the Merkel-Trump meeting: their first get-together last year in the White House, which featured the chancellor and the president in a much-discussed missed-handshake episode. Friday's sequel, marking Merkel's first US visit in her fourth term, offered comparatively little drama. Trump even went out of his way to clearly shake the chancellor's hand.

As far as some of Berlin's major issues are concerned — continued US participation in the Iran nuclear deal, the end of the threat of US tariffs and a continued US role in Syria — Trump in his public remarks after the meeting did not express a significant shift. He again offered a dark assessment of Iran and its role in the Middle East and, when asked by a reporter, would not exclude military action to prevent Tehran from acquiring nuclear weapons.

On the tariff exemption for European countries that is set to expire May 1, Trump again mentioned what he called unfair trade relations between the EU and the US. But he was noncommittal on whether he would extend tariff exemptions or not. What's more, Trump did not explicitly lambaste and single out Germany's comparatively low defense spending, one of his key issues with Berlin, but rather spoke generally about how all European NATO members had to pay their fair share.

So while the meeting was certainly underwhelming regarding progress on key issues, it could still be deemed a success.

Prior to the talks, the high-ranking planners who worked hard behind the scenes on both sides of the Atlantic evidently pre-scripted a sit-down that was friendly and courteous in tone — and both leaders played by the script. Given their rocky relationship in the past, pulling that off counts as a win.

Merkel tried to be as accommodating, at times deferential, to Trump as possible, without negating her own policy positions or making obvious concessions. Trump for his part repeatedly lauded Merkel, stating for instance that they always had a good relationship. This is of course not true, but it clearly underscores the desire of the president — a "what have you done for me lately" politician who views bilateral relations through a mostly transactional lens — to strike a friendly tone and avoid a public falling out.

That Merkel and Trump pulled off such a cordial meeting despite their previous bruising encounters in person and via Twitter makes their brief get-together arguably even more significant than the state visit by Macron, who simply clicks better with Trump on a personal level.

To be clear, no one knows whether the mellowed stance exhibited by the US leader toward Merkel and Germany will soon be swept away by a presidential tweetstorm. But a solid, or at least a decent, working relationship between the chancellor and the president is clearly in Berlin's, Washington's and Brussels' interest. So let's enjoy it while it lasts.

From German Chancellor Angela Merkel to Syrian President Bashar Assad, planting trees has been a way for leaders to mark new beginnings or commemorate past events. DW looks at some significant tree-planting moments. (27.04.2018)