Donald Trump's election win a year ago was a watershed moment. It showed an utterly incompetent politician can become president by appealing to voters' base instincts. But he could be just a harbinger of things to come. 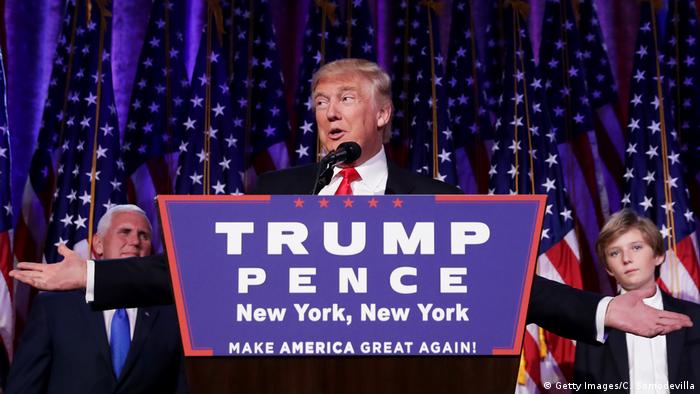 Even after saying and typing the words President Donald Trump hundreds or even thousands of times since his stunning presidential election victory one year ago, it still feels awkward. And that's the way it should be. Because it still is hard to stomach that a rabble-rouser like Trump, with a penchant for routinely speaking falsehoods and no political experience, could win the presidency in the most powerful country in the world through a campaign based on bigotry, misogyny and fear-mongering.

But while it is important to resist the natural tendency to normalize the Trump presidency, it is equally important to fully accept the fact, as difficult as this may be, that Donald Trump did win the election and Hillary Clinton lost it. It is crucial to own up to that reality and not blame Russian meddling, actions by former FBI Director James Comey or other real or imagined interferences for Hillary Clinton's defeat and Trump's win. To look for scapegoats and employ a whataboutism-strategy, a Trump specialty, may be understandable to cushion the hard reality of what happened on November 8, 2016, but it would be counterproductive for trying to prevent a repeat.

A key element in Trump's campaign was his insistence that the country was in bad shape and his promise that he would "Make America Great Again." This was a daringly negative theme to run a presidential campaign on, especially because Trump repeatedly described, often erroneously, how bad things were in the country. And of course he almost always blamed others, like immigrants or Muslims, for the country's problems.

But his negative description of the status quo in the country resonated with many voters because it rang true. That Trump hit a nerve with his depiction of the US as a country on a downward spiral is underscored by the fact that Bernie Sanders, a self-described socialist from the small state of Vermont, was able to win 23 states against Hillary Clinton on a campaign based solely on individual donations. While Sanders is certainly not comparable in style and substance and seriousness, he addressed many of the same issues as Trump that plague ordinary Americans, from income inequality to an aging and often decrepit American infrastructure.

But the core point both Trump and Sanders made repeatedly was that when it comes to the political game being played in Washington, the cards are stacked against ordinary Americans. And the sentiment that political and business elites are looking out only for themselves, while many Americans have a hard time making ends meet, resonated with voters a year ago. And it still does today.

Trump sensed and ruthlessly exploited the widespread feeling of an American malaise and positioned himself, boasting his supposed business acumen, as the sole candidate not beholden to party politics capable of improving people's lives. His basic claim to make America "win again" was not only outlandish, he also had no plan or intention to do it.

Still, it is not unlikely that he would win again if another election were held today, or that he could win a second term in 2020. Never mind that nine months into office he has not been able to pass a single major legislative initiative, never mind that his administration is scandal-ridden like no other in recent memory, never mind that he has not improved Americans' lives.

That he is able to get away with all of that shows that there is no credible alternative, not in the Republican Party, which Trump hijacked and is increasingly turning into his own, and more importantly in the Democratic Party, which is deeply divided about its future course. It also shows the desperation and anger many Americans feel that they cast their lot with someone who operates so far outside the country's political norms.

Having said all that, we may in fact be lucky we are stuck with Trump. Sure, during Trump's disastrous first nine months he has already wreaked havoc on many issues, from environmental policy to international relations. But on many major matters, from the botched travel ban to the failed Obamacare repeal, Trump is running a chaotic and deeply dysfunctional administration.

And now imagine a future candidate who shared Trump's rabble-rousing instincts, but was not as impulsive and nor as chaotic, and could actually execute his pernicious agenda. If both major parties don't wake up to fulfill the basic functions expected from elected officials — namely to provide core government services  we could find out sooner than we think.

Opinion: Why Germans should panic-buy during the pandemic 2h ago

Opinion: Abortion ruling is a nightmare for Polish women 21h ago