Donald Trump jeopardizes world peace. He is aggravating North Korea and Iran and simultaneously widening the gulf between the US and Europe. But he could learn a thing or two from the Europeans, writes DW's Max Hofmann. 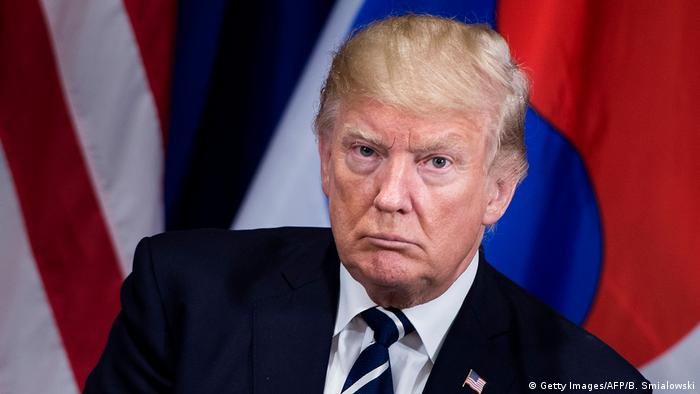 Can someone please find a distraction for the American president? Dangle a shiny object in front of him? Maybe show him a funny YouTube video, or get him to give a rally speech in some small American town. Do anything to keep him busy in the US because when it comes to foreign policy and dealing with countries like North Korea or Iran, Donald Trump horrifies his partners, especially those in Europe.

After years of laying down the groundwork, the negotiating partners struggled for yet another 20 months over the Iran nuclear deal. The European Union had a seat at the negotiation table and ended up scoring a success for the bloc. Ultimately, Europeans were able to use their favorite crisis-resolution skill: classic diplomacy. 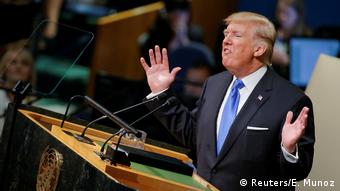 Ever since the Iran nuclear deal was concluded, the International Atomic Energy Agency (IAEA) has checked eight times to see whether Iran has met the requirements. Every time, the answer was "Yes!" The results have been so convincing that German Chancellor Angela Merkel has proposed to use the agreement as a blueprint for further action in North Korea.

A confrontational course for Europe and the US?

Now along comes Donald Trump, who threatens to destroy the greatest international diplomatic feat of recent years. For what? Merely to fulfill a crazy election promise. He mentions North Korea and Iran in the same breath and makes it sound as though both nations must be treated with equal severity. Europeans would never lump these two countries together. Those in Europe know the devastating effects the termination of the Iran deal would have at their own doorstep: the destabilization of the Middle East, Iran's move towards China and Russia, and the strengthening of radical anti-Western forces.

What can the European Union do? It will probably — as already announced by the EU's top diplomat Federica Mogherini – adhere to the agreement, regardless of whether the US pulls out or not. In practice, this could mean that Americans would impose sanctions on Iran again while the Europeans would not, putting the transatlantic entities on a confrontational course with each other. Everyone knows how the US president will react to this. At the same time, the West would lose all credibility as a moral and political entity and would be permanently weakened. If the US and the EU can no longer act together, no one will take them seriously.

The EU has no choice but to continue using whatever influence it still wields over Trump's government. The Europeans must try to keep the US in the agreement. Its success in the past few years should speak for itself, but facts no longer count in the White House. Merkel and company have tried prievously to make Trump come to his senses, as was seen with the Paris climate agreement, but to no avail. In the case of Iran, however, it is a matter of a new cold war — or even a hot war in a highly volatile region. The situation could escalate very quickly.

The prospect for North Korea is even gloomier than for Iran. Europeans have very little influence there. The EU cannot — and does not want to — keep up with Donald Trump's and Kim Jong Un's nuclear swagger. The bloc's demand to focus strictly on politics and diplomacy may seem like it's failing to handle the situation with the seriousness it deserves. However, it is the right way to move ahead and the only way forward for the EU. Here, too, one can see the gapping gulf between Europe and the US in sensitive diplomatic issues. 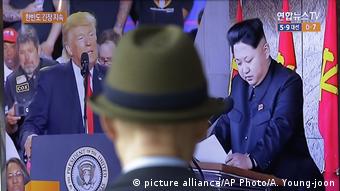 But Donald Trump will have to follow the European example, at least a little bit, if he really wants to maintain world peace, as he declared to the UN General Assembly. His threats, both to Iran and North Korea, have the potential to lead the world to destruction. Europe's diplomatic approach may at times seem somewhat feeble, but it is the only method that has really worked in recent years. The Americans have tried to use military force in Libya, Iraq and Afghanistan, sometimes with disastrous results. That is why Trump's saber rattling and his demand to renegotiate the Iran deal strike Europeans as threatening and hollow. Everyone believes that the president is capable of a blind military attack. The angry man in the White House lacks the experts, the patience, and the competence required to conduct well-balanced and complex negotiations. Europe has all this.

Australia: Ex-PM under fire for secret power grab 1h ago

Opinion: Kenya election degenerated into farce and acrimony 22h ago