Russia have been heavily punished by UEFA for the behavior of their fans at Euro 2016. It is the right decision, but also one that is only made in worst-case scenarios, writes DW's Jens Krepela. 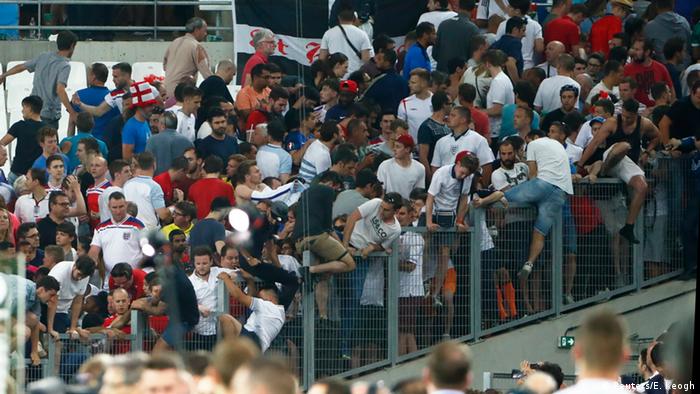 UEFA's disciplinary commission delivered a stern warning to Russia on Tuesday - a "suspended disqualification" from the European Championship and a 150,000 euro (168,000 dollar) fine. It might have been unfair to disqualify the team outright, but it may be the only way to clamp down on football's hooliganism problem.

The scenes we witnessed in Marseille's Stade Velodrome - when scores of frightened English flans fled from the Russians who had broken through security barriers - harkened back to a darker period in football. One incident in particular stands out: the 1985 Heysel Stadium disaster in Brussels, when 39 fans were killed. UEFA recognized the parallels, which may be the reason they did not broadcast the post-match violence on the official TV feed they send to broadcasters. The violence at the Stade Velodrome taints the image of an organization that likes to deal with these kinds of infractions more discreetly.

Organized idiots ready for a fight are one thing, but the current situation has a much graver undertone: encouragement from the Russian political sphere.

"Keep it up!" That's what the deputy speaker of the Russian parliament and member of the ultra-nationalist Liberal Democratic Party Igor Lebedev tweeted after Russian fans clashed with England supporters. It is that kind of rhetoric that that should drive UEFA to step up their punishment. Their decision on Tuesday has thrust the potential for disqualified Russian athletes back into the spotlight. They country is also facing a potential ban from the Summer Olympics in Rio de Janeiro amidst an ongoing doping scandal.

Much like a referee handing out a yellow card, UEFA have given Russia a stern warning. One more infraction, and their team will be sent home. But is UEFA willing to give Russia a red card? Should an incident like what we saw in Marseille take place again, even on the streets away from the stadium, Russia could be removed from the tournament. The same goes for England. It would be a good thing for those responsible if UEFA did indeed go that far.

Opinion: Germany's mandatory testing for travelers is only sensible 22h ago