The G20 has failed to agree a joint position on free trade at the Baden-Baden summit. This is a harbinger of how difficult it may be to strike international agreements with the US going forward, says Henrik Böhme. 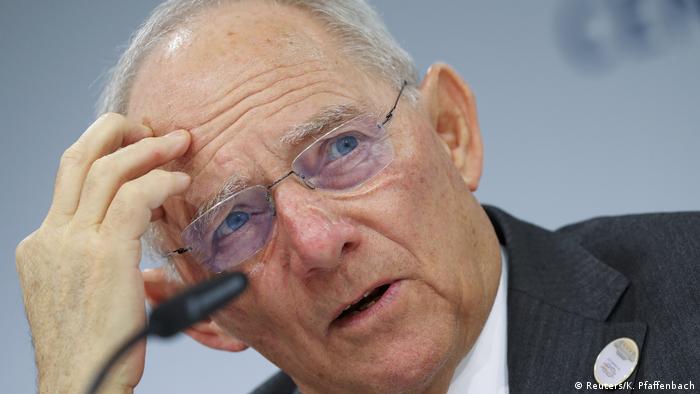 Finance Minister Schäuble: Not a happy end to his turn hosting the G20

This was not the outcome German Finance Minister Wolfgang Schäuble had envisaged. At the start of the G20 finance ministers' meeting in his homeland of Baden, the host of the summit was still convinced that a common policy could be agreed with the United States. A profession of the G20 countries' support for free trade and opposition to protectionist measures was supposed to appear in the final declaration, as it always does after meetings like this. However, the minister failed to wring a compromise out of his American counterpart Steven Mnuchin. All they were able to agree on was a weak statement that they were "working to strengthen the contribution of trade to our economies." A mere platitude.

Is a trade war on the horizon?

At least Baden-Baden has made one thing clear: The new team in the White House apparently means business. US President Donald Trump said it outright at his meeting with Chancellor Angela Merkel: "The negotiators for Germany have done a far better job than the negotiators for the United States." Americans must become more successful at this, he chided. Baden-Baden gave us a taste of what this meant. Not even Wolfgang Schäuble, a highly experienced political strategist, could break through the American blockade.

Describing the finance ministers' summit as a failure would not, however, be a fair assessment. Meetings like this are often informal in character; the concluding documents are not legally binding, but rather a kind of template for the ongoing work of the G20 states. And even if in the preceding years they had always promised each other that they would promote free trade and reduce trade barriers, the trend towards protectionism has actually been apparent for some time. Since 2008 the World Trade Organization (WTO) has counted well over 2,000 measures restricting trade. Given that the G20 countries represent 80 percent of trade worldwide, it's obvious that they aren't keeping their promises.

The argument about trade policy also overshadowed some very positive developments the G20 was able to present. Good progress has been made, for example, by those working on fiscal transparency, or the taxation of big international corporations, and the Americans were also involved in that. Then there's Schäuble's new Africa plan: more security for private investors to encourage them to set aside their reservations about committing to projects on the African continent. General agreement here, too, although this initiative is by no means a major coup.

At the end of the two days, though, no one was interested in any of this. The only question asked, again and again, was: Are we heading for a trade war?

It's not a concern to be dismissed. When Trump's trade adviser describes Germany's trade deficit (too many exports, too few imports) as a "threat to national security;" when the American negotiators are already getting out the "big guns" on trade issues in the preliminary talks for Baden-Baden, then yes, there are reasons to be worried. The criticism of Germany is not new; it was made by Trump's predecessors George W. Bush and Barack Obama, too, and is also regularly heard in Brussels. The German answer is always the same: Are we supposed to make worse products that no one wants to buy?

No grounds for optimism?

A reminder that it is the EU that is responsible for trade policy will not wash with the White House. When the United States imposes the first punitive duties on German exports, it will not have to wait long for a reaction from Berlin. In the past few days, the German minister of the economy, Brigitte Zypries, has been speculating about the possibility of lodging a complaint with the WTO. That would really put the wind up the administration in Washington. Donald Trump's only interest in the WTO is in what it can do for him. For some time now the US government has already been looking into how it can bypass the WTO and impose sanctions.

The 20 countries' pronouncements on exchange rate policy do offer hope that a trade war is not inevitable: No manipulation of the exchange rate to favor national economies.

That does provide a little reason for optimism, after some criticism from across the Atlantic with regard to the "weak euro."

Baden-Baden, then, was a foretaste of meetings to come. It's hard to imagine that things are likely to go smoothly at the big G20 summit in Hamburg in early July: There will be considerably more controversial issues on the agenda there than on the finance ministers' much more manageable list.

EU to profit from US protectionism?

After weeks of complaining about the new US administration's protectionist agenda, a different tune is now being played in Brussels. An EU commissioner insists US policies could be beneficial for the bloc. (21.02.2017)

Free trade between the EU and Russia could bring enormous benefits for both sides, a study by the Munich-based Ifo economic research institute suggests. Only, the Ukraine conflict still stands in the way. (20.02.2017)

WTO launches its first and so far only trade pact

A multilateral trade agreement brokered by the World Trade Organization (WTO) has come into force aiming to remove customs bureaucracy. It's the trade body's first global pact in its 21-year history. (22.02.2017)