The story of a satirist has filled the news for days; it has even dictated public debate and forced Angela Merkel to make a decision. What's going on? Nine thoughts from DW's editor-in-chief, Alexander Kudascheff. 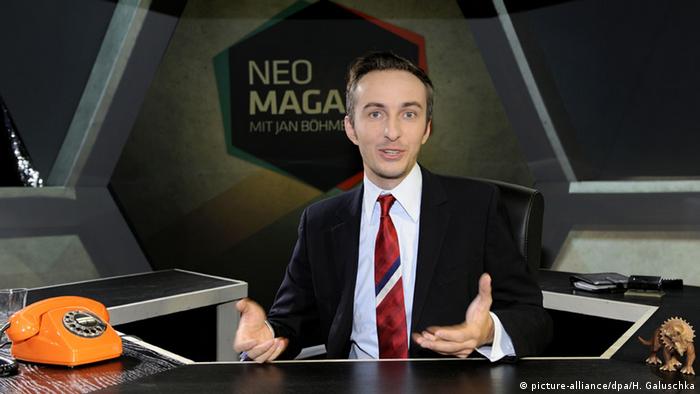 1. The affair: Can it even be called an affair? A satirist explains that what is to come is an insult. And then he does insult: stupendously, appallingly by any standard, pornographically and in a vulgar manner. Nobody has to put up with that, not even a faraway sultan.

2. The method: It was not subtle satire; it was not ridicule, nor was it irony with a profound meaning. Instead, Böhmermann was faithful to Friedrich Nietzsche and showed that he was "philosophizing with the hammer." His words did not gently hold up a mirror to point out a fault; rather, his sorry effort had only one goal: destruction. He wanted to destroy the victim.

3. The victim: Recep Tayyip Erdogan, a man without a sense of humor, also known as "The Sultan" or "The Autocrat." The Turkish president relentlessly prosecutes caricaturists and comedians in his home country, and now in Germany, too. He is the avenger of the insulted.

4. The victim, once again: Recep Tayyip Erdogan, the Turkish president. He dreams of converting Ataturk's secular republic into a presidential democracy based on Islam. So far, he has not yet achieved this on a legal or parliamentary level. However, Erdogan is nonetheless in the process of converting Turkey. Fundamental rights in Turkey's democracy are falling by the wayside. As a result, he has to be the subject of caricature and criticism: He is an ideal target.

5. And for the third time, the victim: He is considered to be a necessary EU partner to help get the refugee crisis under control. He is a victim for whom one must make allowances, and that is why Jan Böhmermann may now face prosecution under lèse-majesté laws. That is indeed funny: A "majesty" who lives in a (supposedly) 1,000-room palace, an Emperor Wilhelm II on the Bosporus. This could really be the stuff of satire.

6. Solidarity: What would have happened if Böhmermann had derided the chairman of the Central Council of Jews or Netanyahu in Israel? Nobody would have shown solidarity with him. The announcement that an insult was coming up would have been dismissed as irrelevant. As it is, it was a cheap shot. It was about our freedom of expression versus the lack of humor in Turkey. A truly courageous confrontation with sovereignties is a different story.

7. Political policy: It was wedged between diplomacy and lukewarm morality. Berlin needs Erdogan, and at the same time it must show that it cannot give in to his huffy lack of humor. It was a diplomatic tightrope act in which a crash was guaranteed from the beginning. But waiting it out was not possible. This left a dilemma: Whatever Merkel did would have been wrong.

8. The public: Western states have experienced how cartoons against Muhammed or Islam have ended in murders, as in the case of the French satire magazine Charlie Hebdo or the Danish cartoonist Kurt Westergaard. These incidents have compelled everyone to become cautious to the point of cowardice. Anyone is allowed to offend the pope: He and the Catholics must endure it. This also applies to Jesus. Now, nobody offends the prophet Muhammed or even Islam and remains potentially unpunished. All those who hold high the flag of freedom of opinion and artistic liberty have adapted to this situation.

9. The affair: Was it really an affair? It was not an affair; it was a deliberate provocation, to which first Erdogan and then the public responded hysterically. Maybe it was just a normal political distraction - from the refugee crisis, the fear of terror, Donald Trump or Vladimir Putin; from the situation in Syria, in Iraq or in Nigeria. That is where the true dramas are taking place. For example, after two years, the parents of more than 200 abducted girls in Nigeria still do not know what has happened to their children. And all they did was to send their daughters to school.

Epstein associate Ghislaine Maxwell to be sentenced 2h ago

Opinion: Can the West wean India off Russia's influence? 1h ago