European states can't just to keep voting and hope that a clear majority will win. They're finding it increasingly difficult to form governments. Spain, too, must learn the art of compromise, says DW's Barbara Wesel. 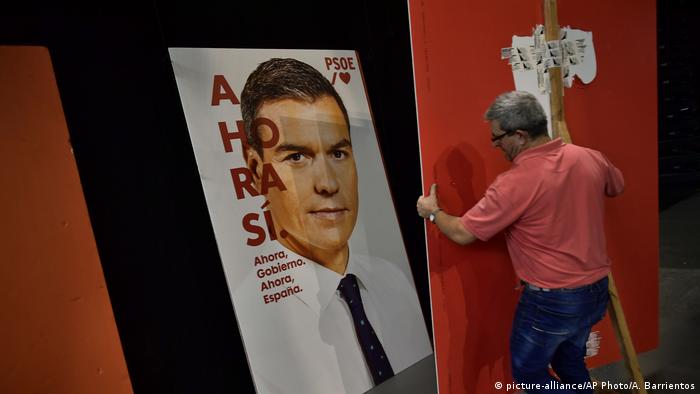 Four elections in four years is a lot to ask of voters. The Spanish electorate has been remarkably patient; in the most recent ballot, the turnout was 70 percent. But the mood is unmistakable – they want their politicians finally to break the deadlock and resolve their incapacity to act.

The era of clear majorities is over

It's almost as if no one in Spain has been looking beyond their immediate political surroundings these last few years. Almost everywhere in Europe, the dominant two-party constellations of old are coming to an end. Politicians are having to find more creative approaches to forming governments. Yet in Madrid, old-style unconditional opposition has remained the order of the day ⁠— politics as an ongoing duel, producing a winner and a loser.

However, the underlying position has changed in Spain as well. Its parliament is now more divided than ever. The Spanish people are represented by 19 groupings, some larger, some smaller. The only way to set up a government will be through flexible and imaginative coalitions. Voters must therefore set aside ideological inflexibility and seek a balance of interests.

In this regard, the left-wing party Podemos is failing miserably. Just a few years ago it was seen as a bearer of new hope. Now it's rapidly losing its voter appeal, having proved inflexible and unwilling to govern. The people don't expect their representatives just to shake their fists and give great speeches in parliament; they need them to act in their interests and implement actual policies.

The Netherlands is a good example of how this can be done. The Dutch have made a real art of building complex coalitions that actually last and are capable of supporting fairly stable governments.

Meanwhile, grand coalitions in Austria and Germany have shown that the two main parties can also work together, if that provides a stable temporary solution. When you're stuck in a political impasse, the idea is at least worthy of consideration. For that, though, the Spanish camps would need to end their deadlocked hostility.

Coalitions should not be unconditional

What it should not lead to, however, is unconditional flexibility toward the far right. Any coalition partner should carefully scrutinize the parties with whom they might join forces. The Spanish Partido Popular (PP) has flung itself enthusiastically at the far-right Vox party simply because it believes that conservative + extreme right-wing is a better fit than conservative + social-democratic.

But is that really the case? Does the PP want to lend its support to a kind of re-run of the Franco dictatorship by giving Vox political respectability? Does it really want to reverse progress on women's and minority rights? Does it want to impose a state of emergency in Catalonia and suppress the separatist movement by force? This is not a debate that was had by the Spanish conservatives, which makes one question how politically responsible they are.

The Catalonia crisis is to Spain what Brexit is to Britain. It's dividing the country and encouraging new forms of nationalism. Although the separatist movement has lost popularity in the region itself, the activists are skilled at constantly reigniting fires, to which the conservative and far-right politicians in Madrid have a Pavlovian response. Their immediate reflex is always to crack down.

Yet every person with an ounce of common sense knows that the only way out of this situation is a political solution, achieved with patience and a sense of what is appropriate. Prime Minister Pedro Sanchez has successfully maintained a balance between firmness and compromise, but he's increasingly coming under pressure from the absurd intransigence of the far right.

Spanish politics needs less ideology and emotion, and more common sense. The days when it was a game of all or nothing are over. Politics can no longer simply be approached with a blind, partisan mentality. So far, though, there's hardly any indication that the country or its politics are actually breaking these bad old habits. It remains to be seen whether the politicians in Madrid will manage to do so. Basically, they have no choice. Burdening voters with their incompetence yet again would be the worst-case political scenario.

Berlin police in pitched battle with squatters 25m ago

COVID: Moscow orders mandatory vaccinations for many workers 1h ago

Biden, Putin face off at long-awaited summit 3h ago