Opinion: Schweinsteiger is still a key player for Germany

The strong play of Toni Kroos and Sami Khedira against Ukraine showed that Germany do not need Bastian Schweinsteiger to win games. But the Germany captain proved his worth in a different way. 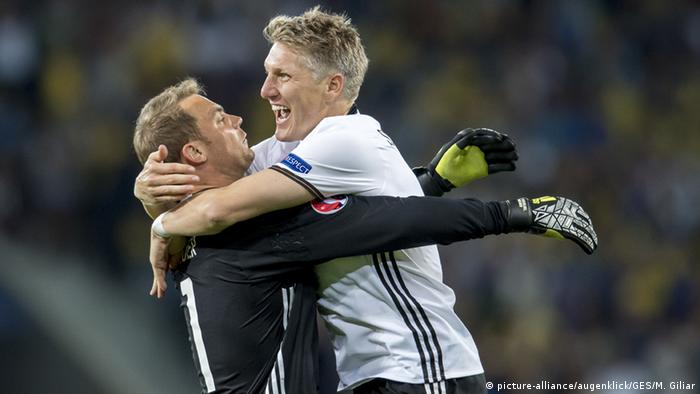 When Toni Kroos and Sami Khedira are playing so well, it begs the question: "Does this team need Bastian Schweinsteiger?"

Kroos especially was the lynchpin in the victory over Ukraine on Sunday. His clever passing in key moments created chances. He played the perfect ball to Shkodran Mustafi to make it 1-0. His excellent set piece delivery and attacking play made him the man of the match. Playing alongside him, Khedira put in a strong performance. The Juventus man brought a different element to the match and could have gotten on the scoresheet several times himself. As the second half got under way, Khedira was one of the few players that could tire the Ukrainians and get under their skin. Who needs Schweinsteiger?

Germany's captain provided the answer himself just 180 seconds after entering the game - his first competitive match since returning from a long-term injury. Nobody expected the 31-year-old would double the score. Löw brought him on to calm down play. Schweinsteiger was supposed to hold the ball and see out the rest of injury time.

The long-injured Schweinsteiger had made just one substitute appearance for Germany in a friendly ahead of the Euros, but on Sunday night he was at full speed to finish off the counterattack. Moments like that show how valuable he really is to the national team.

Löw is not expected to disrupt the Kroos-Khedira combo in the center of midfield by inserting Schweinsteiger into the starting XI. His performance against Ukraine does not change the fact that he is a substitute. But perhaps Schweinsteiger has found a new role with the national team - one that will best help Germany's chances of winning the Euros.

With his goal on Sunday, he has already done more for the team at this tournament than many experts predicted he would. It is not because the goal secured Germany's victory, but the way in which he scored it showed exactly what he brings to the squad. Seeing him celebrate and seeing how the team reacted demonstrated how much he can inspire this team. Maybe he can bring that inspiration to the next match against Poland and the rest of the tournament.