The migration of Roma from southeastern Europe is turning life in German cities upside-down. DW's Verica Spasovska says integrating Roma can't be left to their home countries, but is a task for the whole EU. 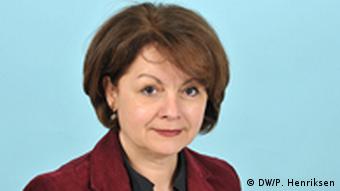 Spasovska is head of DW's Central and Southeast Europe Service

In Western Europe, the integration of Roma was long considered a problem to be solved by the migrants' countries of origin in southeastern Europe. There were plenty of political pleas, concrete aid programs and statements of intent aimed at improving their socioeconomic situation. In 2005, eight central and southeastern European nations signed on to the "Decade of Roma Inclusion" program that - with the help of funds from the World Bank - was to improve the general living conditions of this group of people on a transnational basis to such an extent that they would not end up migrating to Europe's wealthy nations.

This expectation has not been fulfilled. On the contrary: the financial crisis has widened the wealth gap in Europe. Southeastern Europe has been particularly badly affected. In addition, deep social rifts exist in Romania and Bulgaria as they continue the transformation which began 20 years ago with the fall of Communism. The gap between rich and poor is greater than ever before. Groups on the social periphery like the Roma are particularly affected, and simultaneously face the increasing threat of racism-related violence by neo-Nazis.

So it is hardly surprising that many of them attempt everything in their power to improve their living situation, and migrate by the hundred of thousands to Germany or other western European countries. Yet, as could be seen with the eviction of Roma settlements in France under Nicolas Sarkozy's government, there isn't much tolerance around in western Europe either.

Since the accession of Romania and Bulgaria to the European Union in 2007, the number of Roma migrating to Germany has doubled. German cities such as Dortmund, Mannheim and Berlin see themselves faced with an nearly insurmountable problem as this massive influx of Roma from Bulgaria and Romania strains their social welfare systems. And as the Roma arrive in Germany, the whole spectrum of social conflict which their way of life triggers in their native countries comes with them.

In contrast to the thousands of well-educated Romanians and Bulgarians who migrate to western Europe to work, many Roma - due to their particular way of life and their massive poverty - cause special problems in the communities. Many of them live in dilapidated housing, under catastrophic hygiene conditions, without health insurance, and on the edge of illegality. Since the immigrants are not entitled to work, many of them register illegal businesses, thereby gaining access to social welfare. That triggers a defensive reaction in the wider society and disrupts social calm.

What is overlooked is that there are many Roma in Germany who are well-integrated and live in mainstream society without attracting any attention.

The 'poverty migration' of the Roma - a dilemma for Germany

What has become known in Germany as the "poverty migration" of the largest ethnic minority in the European Union - between 10 and 12 million Roma live in Europe - has now become an issue, even if many have a problem admitting it. Given the Nazis' attempt to exterminate Roma and Sinti during Hitler's dictatorship, Germany bears an enormous historical burden. Those who publicly criticize the problems and challenges caused by Roma activity run the risk of being described as politically incorrect. Yet beating around the bush does not help, since only a clear analysis of the issue can help solve it.

The fact is that German cities feel overwhelmed by the many "poverty migrants." They expect financial support from the government and from the European Social Fund. And the municipalities are particularly concerned when they look forward to January 1, 2014, when the European employment market becomes fully accessible to all Romanian and Bulgarian citizens.

Restricting this complete freedom of movement - as some are now demanding - and thereby discriminating against an ethnic group would go against Europe's basic tenets. And the hope that the southeastern European nations will quickly improve the circumstances of the Roma there is unlikely to be fulfilled. Instead, one must accept that the integration of this ethnic minority is a pan-European responsibility. The goal must be fighting poverty among Roma and most importantly, improving their chances of a good education - regardless of where they want to live.

German Interior Minister Hans-Peter Friedrich is pushing for an EU-wide immigration registry. In return, visa requirements for some countries could be lifted. (16.02.2013)