The pontiff's four-day visit to Iraq was an exceptional spiritual and political event. And his appeal for peace and reconciliation was directed not only at Christians, says DW's Christoph Strack. 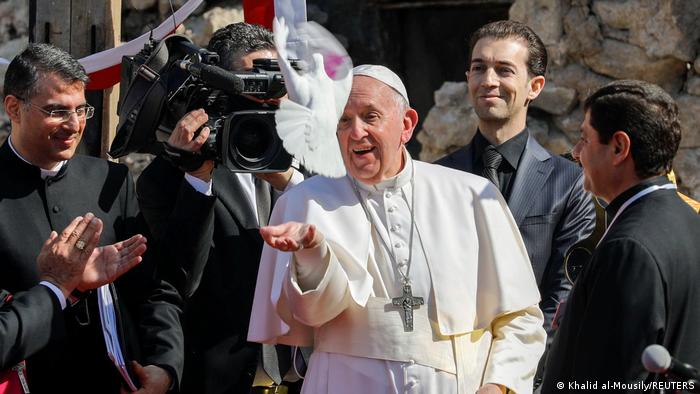 In the ruins of Mosul — just a few years ago the declared capital of the so-called Islamic State (IS) caliphate in Iraq and the place from which the extremist group declared war against Rome — stands an old man dressed in white, praying for peace and togetherness. He relates stories about Christians and Muslims helping one another to survive, to rebuild. About how they have stuck together through all kinds of suffering and despair. "Together, we say NO to fundamentalism, NO to sectarianism and NO to corruption," he says.

The 84-year-old pontiff has seldom taken on such a clear role as a missionary and  uncompromising advocate for peace. And his calls for peace, forgiveness and the recognition of victims on all sides must have been hard to take for Iraq's minority Christians, who now make up only a fraction of the community that existed 20 or 30 years ago. At an interfaith service in Ur, he spoke expressly of the suffering of all ethnic groups and religious communities in the age of terrorism. In particular, he dwelt on the fate of the Yazidis, who experienced the killing of thousands of men and the kidnapping and enslavement of many women and children at the hands of IS.

And in Qaraqosh, one of the places where Christians suffered the most when IS took over, he tied his "no" to terrorism and the misuse of religion to a call for forgiveness: "I know that is very difficult. Yet we believe that God can bring peace to this Earth," he said. Such words came again and again: forgiveness, reconciliation, coexistence — that is Pope Francis' vision for Iraq.

That fits in with the role that he, like his predecessors, plays in the Arab world. There, he is considered not only a Christian leader but also an authority and an outstanding religious figure. This made his meeting with Muslim Shiite leader Grand Ayatollah Ali al-Sistani, for instance, all the more important. In photos and videos of the meeting, one just sees two dignified elderly men, one dressed in simple black, the other in simple white. Yet for all the simplicity of the scene, these images showed viewers across the region — from Turkey to the Atlantic and the Indian Ocean to the Mediterranean — that it is, or at least should be, possible to get along with one another. The pontiff hadn't touched down in Rome before a Shiite leader from Najaf announced that he and a delegation would soon travel to the Vatican.

"Let us affirm that God is merciful, and the greatest blasphemy is to profane his name by hating our brothers and sisters. Hostility, extremism and violence are not born of a religious heart — they are betrayals of religion," the pope declared just an hour later in Ur, the place "where faith was born."

"We believers cannot be silent when terrorism abuses religion; indeed we are called unambiguously to dispel all misunderstandings," he said. For decades, Iraq, like many countries in the region, experienced a fragile but functioning coexistence between numerous religions and denominations. That is what Pope Francis is refering to and hoping for again.

The disconcerting behavior of political leaders

Alongside praise for this trip and for all of the pontiff's major statements and small gestures, one must note, as many have, how extremely difficult it must have been to organize this trip. Here, the political leadership in Baghdad played a strange role: It behaved almost as though Francis was visiting only the capital and not Iraq as a whole, this country of many faiths and ethnicities. 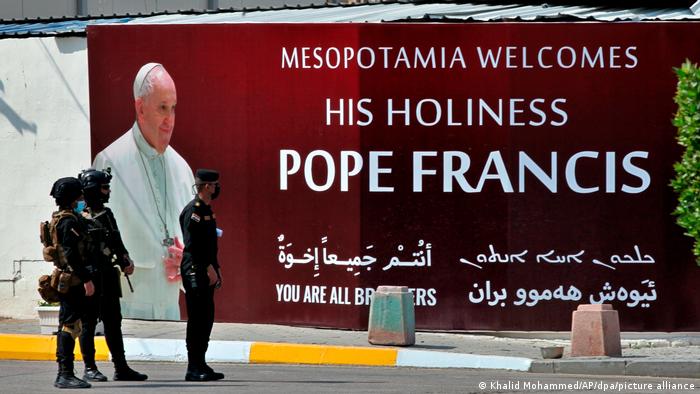 The pope was welcomed by many posters in Baghdad

When the pope traveled to Najaf and Ur, then to Kurdistan and on to Mosul, Qaraqosh and Erbil, not one high-ranking government representative was anywhere to be seen. And barely a word was heard from the country's leadership, except for the very public declaration that from now on, March 6 would be celebrated as a "Day of Tolerance and Coexistence." Such a grandiose declaration jarred somewhat with the many examples cited by Francis suggesting that tolerance and coexistence must be practiced in small ways and on an everyday basis.

Abraham as a connecting figure

And then there was the absence of any Jewish representative at the the interfaith event. Pope Francis expressly mentioned the Jews and spoke as though Jews were with him on the stage. But neither a member of the tiny Jewish community in Iraq nor an official Jewish representative from the delegation traveling with the pope was to be seen in the biblical "Ur of the Chaldeans," where mention of Abraham — whose legendary birthplace it is — as the father of the monotheistic religions of Judaism, Christianity and Islam could have served as a connecting element. Here, too, there was talk that the central government had been somewhat obstructive.

However, the world has now at least been reminded that Iraq has always been a multireligious country and that it should remain so in the future. And it was not only Christians that Francis called upon to keep working toward this goal, but all people living in Iraq and their political leaders.

Germany: 'Violence against Men' helpline got 1,800 calls in one year 2h ago

Opinion: A very German way of handling the COVID-19 pandemic 1m ago