Opinion: One year on, New Zealand struggles to make sense of mosque attacks "How did this happen?"

On March 15, 2019, those four words were etched onto the lips of every New Zealander.

That afternoon, a lone gunman walked into two mosques in Christchurch, during Friday prayers — the busiest time of the week.

Many of the worshippers had their eyes closed and their backs to the gunman, as he began indiscriminately spraying bullets at them. Fifty-one were killed and dozens more injured.

The country's innocence was shattered, and its identity was changed forever.

New Zealand, best known for rugby, wool, milk and hobbits, has always been proud of its independence.

The remote, rugged island nation — home to just 4 million people — is tucked away at the bottom of the world, far from the most dangerous hot spots.

In recent years, New Zealand has been shielded from the wave of nationalism and divisive, populist ideology that has swept across Europe and North America.

But the Christchurch terror attack proved that in the digital age, there is no safe haven from extremism.

The alleged gunman, who is yet to face trial, had outlined his xenophobic views in a manifesto that was published online before the attacks.

Over the past 12 months, New Zealand has been forced to confront the systems, attitudes and social norms that allowed the attack to take place. This period of soul-searching has been uncomfortable and contentious — but also revealing.

For many years, New Zealand's Muslim leaders had advised government agencies that their community was facing an increase in discrimination and threats, particularly from members of the alt-right.

In 2016, for example, a group of neo-Nazis delivered a box of pigs' heads to the Al-Noor Mosque in Christchurch, chanting: "White power … Let's get these f***ers out. Bring on the cull."

Muslim leaders asked many state agencies for greater protection. They say that those requests fell on deaf ears. Instead, the agencies were fixated on weeding out potential terrorists from within the Muslim community itself.

If security services were monitoring mosques, they should also have been exploring the dark recesses of popular social media platforms.

The Christchurch terror attack exposed the woeful failure of social media giants to identify and police the most inflammatory, dangerous — and, in some cases, criminal — activities that take place on their websites.

These companies had created environments in which extremists could find each other, share information and become emboldened in their warped ideologies, before taking harmful actions in real life.

Ardern's leadership has received international acclaim. A striking photograph of the 37-year-old, who wore a hijab while meeting survivors of the terror attack, was printed around the world.

Racism overt and unspoken

But it was Ardern's choice of words on the afternoon of the attack that resonated most deeply. Speaking about the refugee and migrant communities that had been affected, she said: "They are us."

It was a statement of inclusion, tolerance and acceptance. These people were not simply visitors to New Zealand, Ardern said — they were Kiwis. They had put down roots on our soil, and they deserved to be safe.

As a person of color, and a second-generation Sri Lankan New Zealander, I appreciated that sentiment. 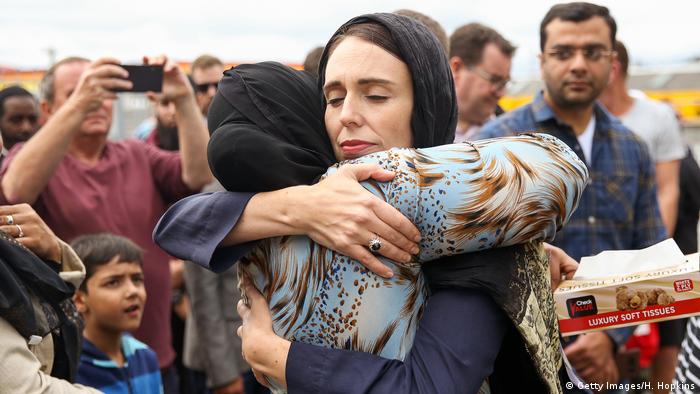 After the attack, Prime Minister Jacinda Adern met with mosquegoers at the Kilbirnie Mosque in Wellington

But over the past year, I have also been reminded that tensions around race and identity are deeply embedded in New Zealand society.

Racism exists here in many forms — both overt and unspoken; conscious and unconscious. Those of us who come from minority backgrounds have experienced it.

New Zealand is a former British colony, and has a shameful history of cultural oppression, beginning with the Crown's treatment of the indigenous Maori people.

In 2020, New Zealand is a multicultural nation, but its heartland is built upon traditional values that often leave no room for other beliefs, ideas and ways of life.

For new arrivals to the country, life in "paradise" can be deeply isolating.

As we mark the first anniversary of the Christchurch terror attack, powerful institutions will continue to face tough questions about their responsibility to crack down on extremism and hate speech.

But the real lesson to learn from Christchurch is much closer to home for every New Zealander: How can we stamp out prejudice in our schools, homes, workplaces and communities?

A year on, we ask: "How can we make sure that this never happens again?"

DW sends out a selection of the day's news and features. Sign up for it here

Armed only with a credit card reader, Abdul Aziz Wahabzada confronted the attacker in Christchurch. His actions are believed to have prevented further deaths. He talks to DW. (17.03.2019)

US Pentagon planning Ukraine command in Germany: Report 3h ago