The migration problem in the European Union threatens to become the bloc's greatest crisis since the EU's foundation over 60 years ago. No solution is in sight, even after the special summit, writes DW's Robert Schwartz. 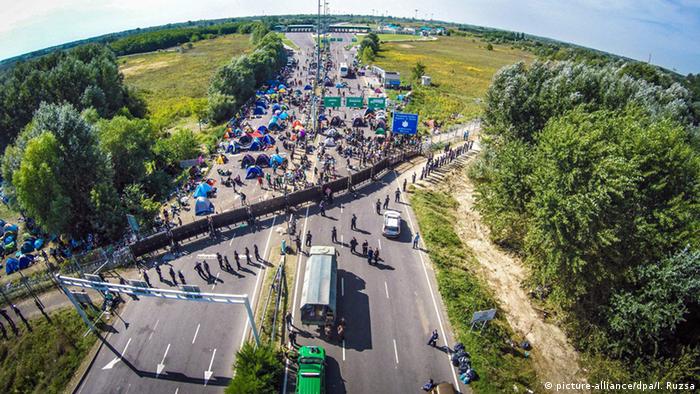 "Another victory like that, and we have lost," may be what many European politicians thought after EU interior ministers voted on common quotas for refugees. The endless haggling over the acceptance of refugees is shameful, for they are desperate people who have had to turn their backs on their homeland because of war and suffering.

The numbers politicians negotiated have long been a waste of time, as Germany alone expects refugee numbers five times higher by the end of the year. Lofty European ideals have been dampened by a renewed agreement-to-disagree with consequences no one can predict.

It is not the first time in the history of the EU that various national interests have clashed with the need for solidarity in the community. Britain, France and Germany, too, have been guilty of this in the past.

Now four "new" Europeans are at odds with the others, the most prominent one being Hungarian Prime Minister Viktor Orban. His country could even profit from the quotas - Hungary will be provided with funds by the EU on account of the vast refugee influx it has experienced over the last few months.

Poland and the Baltic states were the first to fulminate against a distribution quota. Just before the summit wrapped up, however, they managed to make a pragmatic turnaround and now suddenly count among the "good Europeans."

The four who voted against the quota are Hungary, Romania, Slovakia and the Czech Republic. Romanian President Klaus Iohannis has missed a great opportunity to present himself as a European by conviction. Instead, he opted to maintain a fragile peace in Bucharest by appeasing the country's petty nationalists in Brussels.

Slovakian Prime Minister Robert Fico announced his country would file a lawsuit against the decision in the European Court of Justice. His Czech counterpart, Bohuslav Sobotka, opposed the quota system, but did not want to sue. Unlike Slovakia, the Czech Republic and Romania intend to implement the decision.

No convergence of living standards

One of the arguments the four holdouts have made, however, must be conceded in Brussels: It is not acceptable that the same standards for dealing with refugees and asylum seekers should be pushed on all states, without comparable living standards for all citizens in all EU countries.

An overall refugee package would have to include a long overdue common fiscal and economic policy. The disparities between the rich and poor countries in Europe are far too great. If the "old core" of the European Union is aiming for acceptance of its policies in all EU countries, then it must take into account the problems facing average citizens in the new member states.

The EU already began to falter during the Greek crisis. Now the migration crisis is forcing the ailing system even closer to the brink of disaster. It would be irresponsible to make border protection and aid for Syrians the centerpiece of EU policies, while neglecting conditions in the European Union itself.

The consequences of such policies are already clear: More and more people are thumbing their noses at the political elite; mistrust and anger are spreading; populist and extremist movements are becoming stronger.

A crisis of democratic order would be the last thing the EU needs now. "We can do it" - that is how Chancellor Angela Merkel repeatedly motivates her partners.

But no one seems to really know how things will work, especially after this European summit. Europe's turmoil is heading to the next round.

Victims of a border row

Since Hungary sealed its border with Serbia, Croatia has become the main migration transit country in the Balkans. Hungary is building a fence here as well - but for now it is letting migrants pass through. (25.09.2015)