Opinion: No cause for joy

The new German government has been sworn in. Chancellor Merkel and her ministers can begin their work. But, for democracy in Germany this is no cause for joy, writes DW's Bettina Marx. 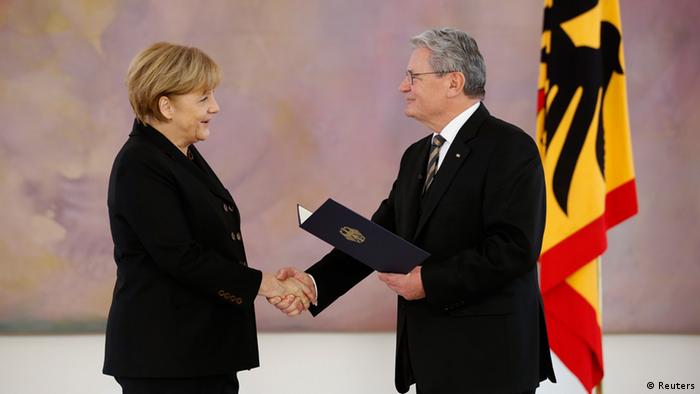 Finally! Germany has a new government. After an unusually long interregnum of almost three months since the September election, the new cabinet has been sworn in and the grand coalition can begin its work. And it will have to work fast because many of its plans and projects cannot be kept waiting.

The Federal Republic of Germany, Europe's economic powerhouse, the political locomotive of the European Union and a global player in the international arena needs to act as quickly as possible.

The centrist coalition government of Christian Democrats, Social Democrats and Bavarian Christian Social Union has a staggering majority in parliament, but it needs to rapidly tackle the problems that have been waiting for attention: the euro crisis, Germany's creaking infrastructure, education deficits, the widening gap between the rich and poor, and, last but not least, the herculean endeavor, known as the 'Energiewende' - Germany's move toward sustainable, renewable energy sources.

Furthermore, there are a plethora of foreign policy challenges that require the attention of a strong and sagacious government: the Ukraine crisis, the refugee catastrophe in the Middle East, Iran's nuclear program, and the loss of trust in the United States.

The new government that must cope with all these tasks has already offered up a few surprises, suggesting that it can make things happen over the next four years: a strong woman at the helm of the defense ministry who can be relied on to get a grip on this complex military juggernaut; a young and fresh attorney to head the Justice Ministry; a relatively unknown but experienced expert to lead the Development ministry and a Minister of State for Cultural Affairs who enjoys bipartisan respect. At the head of the cabinet table, of course, is Angela Merkel with vice-chancellor Sigmar Gabriel, both unchallenged in their respective parties and at the top of their game.

This should all be a reason for confidence that Germany will be in good hands over the next four years; but even so, there's little sign of a celebratory mood because it's hard to be happy about a government with this much power.

The three-party coalition enjoys such a sweeping majority that it is not longer possible for the opposition to exercise an effective control function. The opposition, in fact, is practically non-existent. It will be difficult for the Greens and the Left Party to introduce their own legislation and present the German public with an alternative. Dull debates and rubber-stamped legislation will be the hallmarks of the next four years.

This is not good for democracy, which lives and breathes from the clash of ideas and policies. When most Germans support a grand coalition in opinion polls, this may be just a desire for harmony and consensus in the face of major challenges, or perhaps it means that German society today is less interested in politics. For a parliamentary democracy, however, this is the worst of all possible governments.

As Merkel takes her place ahead of her new coalition government with the Social Democrats, she can look forward to new challenges for her cautious style of government. (17.12.2013)

Three German ministries that address economic issues have been given new responsibilities with the new grand coalition. But these new 'superministers' may create more problems than they solve. (17.12.2013)

Angela Merkel's new team has emerged following weeks of talks. But her third term will not be easy, with big challenges ahead and strong personalities in her cabinet. (16.12.2013)