The Islamic groups protesting Myanmar's Rohingya killings are shamefully silent over the persecution of minorities in their own countries. We must not let them Islamize the conflict, says DW's Shamil Shams. 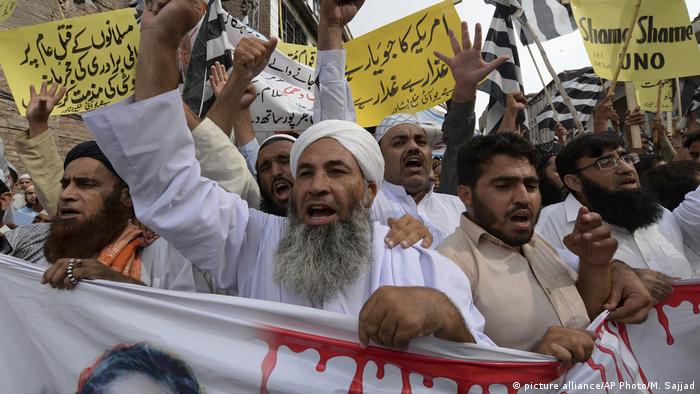 Almost all Muslim-majority countries have decried the killings of the minority Rohingya people in Myanmar. From Turkey to Pakistan, leaders of Islamic nations have condemned the ongoing security operation in Myanmar's western Rakhine state, which has killed hundreds of Rohingya and forced about 294,000 people to flee the area. The Organization of Islamic Cooperation (OIC) is set to issue a statement against Myanmar in Astana, Kazakhstan, on Monday.

At the same time, Islamist groups in Indonesia and Pakistan are holding mass demonstrations against Myanmar's Buddhists, its government and de facto leader Aung San Suu Kyi. The calls for the Nobel Committee in Sweden to rescind Suu Kyi's peace prize are getting louder by the day.

What is happening in the Southeast Asian country is indeed condemnable. But what is equally reprehensible is the Muslim countries' response to the plight of the Rohingya.

The track record of Muslim-majority countries over their treatment of religious and sectarian minorities is abysmal. On Sunday, September 10, three Hazara Shiites were killed in Pakistan's northwestern city of Quetta. The minority group has been systematically targeted by Islamists for many years, and the government has never paid heed to their plight.

The discrimination against Hindus, Christians and Ahmadis on the state level has persisted for decades. The Islamic country's blasphemy laws have forced religious minorities to live under constant fear for their lives. The Christian neighborhoods have been torched by the majority Muslims, and members of the Hindu community could be lynched for "insulting" Islam or its prophet, Muhammad.

Religion-based persecutions are on the rise in other Muslim countries also. The rise of political Islam in Indonesia and Malaysia is a threat to the cultural plurality of these countries. It is ironic that hard-line Islamic groups in Indonesia, Malaysia and Pakistan are protesting discrimination against the Rohingya in Myanmar.

None of this justifies the fact that the Rohingya remain one of the most persecuted communities in the world. The stateless people have been living in Myanmar for decades, yet the country's government refuses to grant them citizenship. Neighboring Bangladesh, a Muslim country, doesn't accept them either. It is a huge and indescribable human tragedy. But those who are giving a religious color to the Rohingya situation are doing harm to an oppressed community.

It is not a fight between Buddhism and Islam. The fact is that Western governments, their institutions and rights groups have been raising their voice for Rohingya since the outbreak of violence in Rakhine in 2012. Last month, Kofi Annan, former secretary-general of the United Nations, compiled a fact-finding report on the conflict in Rakhine and pressed Suu Kyi's government to give equal citizenship rights to Rohingya. International aid agencies are helping the Rohingya more, both inside Myanmar and in Bangladeshi refugee camps, than slogan-raising jihadi groups, Turkish President Recep Tayyip Erdogan and Pakistani Prime Minister Shahid Khaqan Abbasi.

The hypocrisy of Islamic groups is also evident from their selective criticism of the Muslim plight around the globe. The Muslim allies of Saudi Arabia have been silent over Riyadh's bombing of Yemen, an impoverished Middle Eastern country with a large Shiite population. Thousands of people have been killed in the Yemen war since 2015, yet there hasn't been any criticism of Riyadh by the Pakistani government or the Arab Gulf states. The Syrian and Iraqi conflicts are also interpreted by Muslim nations according to their closeness with either Saudi Arabia or Iran. The human misery, the massacres, and the atrocities committed by militant Islamists are often looked at through a sectarian lens.

Read more: The persecution of Ahmadis in Pakistan and beyond

The Muslim condemnation of the Rohingya massacre is subjective and biased. It is hollow because it belittles the human suffering by turning it into a religious issue. The conflict in Rakhine has never been about Islam versus Buddhism. It is an economic and political issue that has plagued the region for decades. The jihadi element, however, has been injected into the conflict, and the Rohingya are already paying the price for a militant transformation of their human predicament.

Islamization of the conflict

The Arakan Rohingya Salvation Army, which attacked Myanmar's security forces on August 25, has jihadi links. There are reports that Rohingya militants have links to Saudi Arabia, Pakistan and Afghanistan also. Since the start of the latest conflict, jihadi groups in Afghanistan and Pakistan have started collecting funds to aid militants in Myanmar. Indonesia's Islamists are also getting increasingly involved in the conflict. Many of these groups have ties with al-Qaida and even the so-called "Islamic State" (IS). The Myanmar government says it is only responding to the jihadi threat. It is partly true but also a justification to suppress the Rohingya even more.

The victims of this Islamization of the Rakhine dispute are the Rohingya people. Instead of resolving the issue through diplomatic means and human rights interventions, Islamic countries have chosen to strengthen the jihadi narrative in Myanmar. This doesn't augur well for the stateless Rohingya, who have already suffered a lot at the hands of Myanmar authorities. The Muslim hypocrisy and the introduction of jihad in Rakhine will only make things worse for them.