Israel's prime minister has ordered construction of a separation barrier ruled illegal by the International Court of Justice to continue. Were the wall on Israeli soil, nothing could be done. But that's not the case. 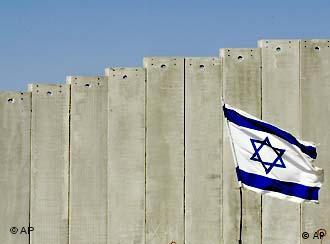 Israeli Prime Minister Ariel Sharon is completely missed the point when, in Sunday's cabinet meeting, he condemned the International Court of Justice's ruling against the massive separation barrier as "one-sided, political, and immoral. And he missed it even more when he alleged that Sunday's deadly bombing in Tel Aviv was the result of a ruling that "sends a destructive message to encourage terrorism and denounced countries that are defending themselves against it."

But Sharon is in good company with his criticism of the court's ruling. Rejection of it can be heard across the entire Israeli political spectrum. Even opposition leader Shimon Peres -- who's now been asked to join Sharon's coalition -- has accused the International Court of Justice of disregarding the state's basic right to survival.

Such reactions show that Israel is trying to pull the wool over the world's eyes. Nobody is questioning Israel's right to security, or its right to defend itself -- not even the International Court of Justice. The court looked into the problem in great detail, and found that the construction of the 700-kilometer (425-mile) long barrier -- predominantly on Palestinian soil -- isn't an acceptable security solution.

If the wall stood on Israeli soil, it wouldn't have been an issue for the court, or the United Nations. But as it is now, the international community has to deal with it, because of the huge effect the barrier is having on the lives of Palestinian people.

Time to face up to the truth

It's not just the court's ruling that should be a source of embarrassment for Israel, but also the conclusion that Israel has been an occupying power since 1967, and is therefore subject to the conditions of the Geneva Convention. Although this has long been a recognized fact worldwide, in Israel, people have been wangling over this reality for years.

Since the territories before the Six Day War in 1967 weren't part of a sovereign state, one couldn't speak of an "occupation," therefore the Geneva Convention wasn't applicable, the argument went. But out of "generosity," Israel said it was prepared to follow parts of the convention.

But after the ruling in The Hague, the days of such selective generosity should be over. Now, it's official: Israel is an occupying force, and does have to abide by international law if it doesn't wish to be treated as a pariah.

Taking refuge in domestic justice is also useless: Israel's Supreme Court has already declared 30 kilometers of the barrier illegal, though on the whole, it shared the government's view that the barrier will deliver better security. But it was exactly this point that was disproved on Sunday morning in Tel Aviv. This first deadly bombing in Israel since March happened despite -- or perhaps even because of -- the separation barrier.

The International Court of Justice in the Hague on Friday ruled that the construction of a wall diving Israel and Palestinian territories violates international law. The UN had requested the non-binding ruling. (July 9, 2004)