Opinion: Macron the Messiah is still learning to be president | Europe| News and current affairs from around the continent | DW | 15.08.2017

Opinion: Macron the Messiah is still learning to be president

One hundred days after the election, only one in three French citizens is happy with Emmanuel Macron as president. But that doesn't mean it's over for him, argues DW's Christoph Hasselbach. 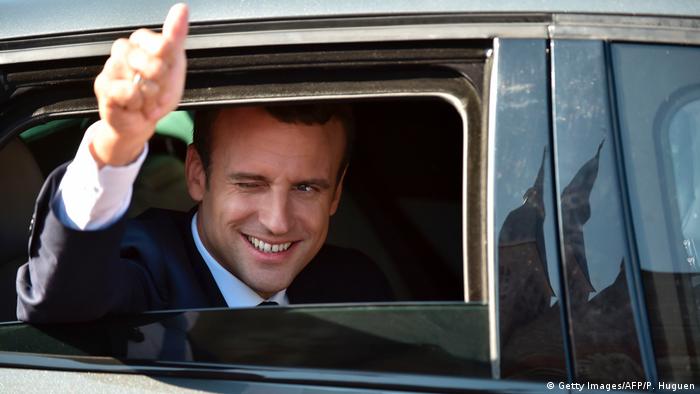 Not long after his spectacular victory in France's presidential election, the cover of British magazine The Economist depicted Emmanuel Macron as a figure walking on water. Indeed, Macron was being celebrated all across Europe as a kind of messiah: Not only had he saved the continent from the nightmare of a Marine Le Pen presidency, but he also seemed to have awakened a new European spirit - and reinvigorated the French one in the process.

The charismatic, sharply dressed 39-year-old seemed like a breath of fresh of air. Macron had something to offer for almost everyone: better opportunities for the less educated; less taxes for businesses; a stronger state for the uninsured. He even appealed to conservatives by waving to onlookers from an open-top military vehicle during his inauguration parade, instead of a limousine like the one used by his Socialist predecessor Francois Hollande.

It's no surprise that this energy hasn't lasted. Still, the speed with which his poll numbers have plummeted has taken many by surprise. Among those angry at Macron are civil servants, whose pay raises he wants to cap. And the president's chief military officer, Pierre de Villiers, has resigned in protest against proposed cuts to military spending.

The honeymoon is over

Macron hasn't even tackled one of his biggest promises, implementing his much-hyped labor market reform. Nor has he dared touch the country's 35-hour work week law, which has cost Fance so much of its competitiveness. And there's still the matter of pension reform. The first major showdown is expected after the summer holiday - unions have already called for strikes.

Macron's success had much to do with the circumstances of the last election - above all, with Marine Le Pen. Many voted for Macron not because they actually wanted him as president, but because they wanted to prevent Le Pen from taking office. And during the first round of voting, almost half of French voters chose candidates who wanted a more protective stance against globalization. Many of those who voted for Macron in the second round for tactical reasons have hardly altered their principles.

Among the tactical Macron voters are also those who would have voted for Conservative candidate Francois Fillon, had he not become embroiled in a scandal involving payments to his family members. And had the Socialists not been sidelined in such a way during the campaign, they too would have sucked away some of Macron's support. The president now has to answer to these tactical and skeptical voters - and it's going to be difficult to please them all.

A rocky transition to statesman

Still, his problems are not insurmountable. Macron will next tackle a series of unpopular reforms, but if they help improve the economy he will reap the rewards. Macron also makes for an impressive figure on the international stage. Almost seamlessly, he seems to be moving from political climber to elder statesman. And he's profiting from a new prevailing mood in Europe, one that's moving away from populism and toward serious politics.

Obviously, none of this guarantees success. But the French seem to believe that a fundamental opposition to change has led the country into a crisis. Macron is no god-like figure, even if, ironically, his nickname is "Jupiter." But the young president who is very much of this earth nonetheless has a good chance at becoming the reformer France needs.