The decision by Germany head coach Joachim Löw to axe Thomas Müller, Jerome Boateng and Mats Hummels was a shock, but a huge boost to Bayern. Löw might just have handed them a chance at the treble, says Jonathan Harding. 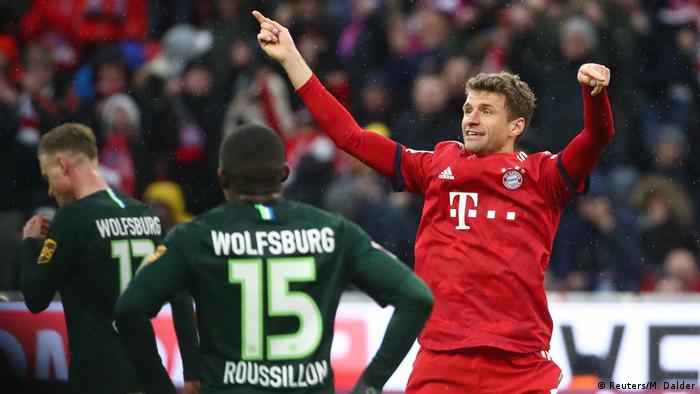 There's no denying that Bayern Munich deserve credit for hauling in Borussia Dortmund in the Bundesliga title race. Head coach Niko Kovac and his players have turned things around in impressive fashion, even for Bayern.

But now the record German champions have received a boost that must leave the rest of the Bundesliga, Borussia Dortmund in particular, sighing in disbelief. If there is any side that doesn't need any external help in March, it's Bayern Munich.

Joachim Löw has handed the Bavarians exactly that. Axing Thomas Müller, Jerome Boateng and Mats Hummels has done nothing but motivate the trio into proving the Germany head coach wrong.

Bayern gets a boost

The three impressed against Wolfsburg, with Müller even getting on the score sheet. Teammate Robert Lewandowski said the trio had delivered their answer on the pitch. Coach Niko Kovac said the performances showed what kind of people they were to convert their frustration into something so positive.

Remarkably, in a season when Bayern Munich have tried and failed to control the narrative around the club on so many occasions, it is an outside voice that ends up giving the team a boost at the pivotal point of the campaign. Having cited the German constitution in a petty and yet extraordinary press conference in October last year, Bayern also clamped down on recent comments about Lewandowski. None of it came across well, and Bayern president Uli Hoeness even faced public criticism at the club's latest AGM.

Löw's decision couldn't have had a more contrasting effect. Müller, carrying on from his season-best performance against Gladbach last time out, looked a constant threat. Hummels and Boateng might not have been under too much pressure, but looked imperious at times, both delivering passes from the center of defense that should have been accompanied by a PG-13 rating.

The biggest plus of all was their impact on the rest of the team. Lewandowski looked more confident in front of goal. Niklas Süle got a rest ahead of the Liverpool game. Franck Ribery, probably furious he didn't start, came off the bench to deliver three assists in 35 minutes and remind everyone at the club not to worry if Kingsley Coman is out of the Liverpool game. Everyone's game was raised.

Bayern and Dortmund meet on April 6. There's a chance that by then, Bayern will be ahead by more than just two goals in the Bundesliga, and that they'll be in the quarterfinals of the Champions League and the German Cup semifinals. One look at how Müller, Boateng and Hummels are performing and suddenly Bayern look capable of winning everything. While that's not all down to Joachim Löw, he has certainly played a role.

Bayern Munich turned up the heat in the Bundesliga title race, while Borussia Dortmund struggled in the wind and rain against Stuttgart. On Friday night, Schalke improved but not by enough. (09.03.2019)