Opinion: If life seems endlessly gray, it's because it is

An endlessly gray January in Berlin prompts existential questions ranging from the role of Big Tech in society to the challenge of conceptualizing climate change, says DW's Kate Ferguson. 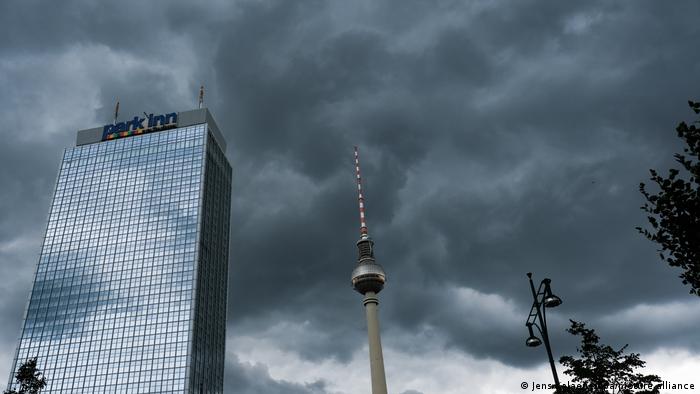 Berlin's sky has been gray for most of January 2021

There is a Twitter account which posts thrice-hourly updates on the color of the Berlin sky. The updates are affirming, in a bleak way.

If life seems endlessly gray, it's because it is. In the past hour, Berlin has oscillated between slate gray, battleship gray and taupe gray. Before that it was manatee and for a brief, brighter moment, platinum.

Earlier, as I lay watching a silent television mounted on the ceiling of my dentist's surgery, I wondered when I last had such unapologetically close contact to two other humans. As the dentist bored into the molar that needed filling, he discovered a larger-than-expected cavity. "I'm glad we went for the anesthetic," he said. The dental nurse sprayed something into my mouth and I felt nothing.

In this phase of the pandemic, numbness has become a familiar sensation. There is little sourdough bread or clapping for health care workers this time around. The thrill of vaccine discoveries has been replaced by squabbles over supply and distribution.

This week, German media outlets reported on the possibility that the Oxford/AstraZeneca vaccine was only 8% effective in the over 65s. The reports appear to have been based on a fundamental misinterpretation, with the 8% probably referring to the proportion of trial participants in an older age bracket.

But the headlines were out and they spread around the world, serving more fears to an already uneasy populace.

The question of when this pandemic is going to end is not the only source of perpetual disquiet. There are also the other worrying, wearying areas of gray, like what role Big Tech companies should play in upholding democracy. In January, the world witnessed two approaches.

In Uganda, the government banned social media ahead of the general election, justifying its decision on the basis that Facebook had taken down accounts linked to the ruling National Resistance Movement party. Facebook says it removed the accounts because they were being used to manipulate voters.

Meanwhile in the dying days of the Trump administration, Twitter, Facebook and YouTube suspended the former president for inciting deadly riots on the Capitol. This move provoked a surprise rebuke from German Chancellor Angela Merkel, whose spokesman called the ban problematic and stressed the fundamental importance of free speech.

The response by Merkel, who herself does not have a Twitter account, highlights a debate that has been building for well over a decade. Whom do we have more faith in: our elected leaders or the platforms we entrust with our personal information?

As if these questions aren't existential enough, there is the immediate threat of climate change to contend with, too. Earlier this week, ProPublica published a profile of a couple for whom this particular peril shapes every moment. How, the writer asks, "do you confront the truth of climate change when the very act of letting it in risked toppling your sanity?"

Interconnected beyond our natures?

The same question could be asked about the pandemic, and for the millions of COVID deniers around the world, believing in conspiracy theories or trivializing the extent of suffering that the disease has caused is an easy antidote to the messy truth that in this most horrifying of situations, there are no simple answers.

I cannot help but feel, however, that if there is one thread that unites such questions as the future of Big Tech or the causes of the pandemic and of climate change, it is that we have become interconnected beyond our natures and our means. I think of this now, as I observe the gray sky above me through a screen.

Indonesia: Over a dozen killed as tour bus hits billboard 2h ago